On a hilltop south of Ashland, the center for Buddhist studies quietly marks its 25th year much as it did its first, in spiritual comtemplation

Ashland, Oregon (USA) -- It's a place of peace, where over the past quarter-century, thousands of people have come to learn meditation and practice the Dalai Lama's words: "My religion is kindness." 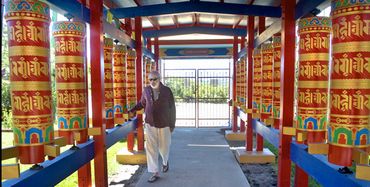 << Philip Thomas spins the prayer wheels in the prayer garden at Tashi Coling Center for Buddhist Studies in the Colestine Valley, south of Ashland

It's the Tashi Choling Center for Buddhist Studies, a remote 65-acre sanctuary in the Colestine Valley that greets you with rolling hills, studded by gold spires, sweeping red walls and giant, entrancing statues of Buddha and the Taras (the female Buddhas).

"It's really unique, a jewel box. It's his gift to Southern Oregon and to everyone," says Philip Thomas, a guide, resident and dedicated Buddhist, describing the temple's lama, Gyatrul Rinpoche, who fled Tibet in 1957, after the Chinese invasion all but destroyed the religion there.

"I love it here," said Rinpoche, 85, describing the temple as a place that helps satisfy Americans' love of learning and knowledge.

The dazzling temple, which houses his living quarters on the second floor, is a replica of many in Tibet and the Far East and serves the purpose, he notes, of helping overcome war, famine and suffering in the world.

His translator and caretaker, Sangye Khandro, said Rinpoche, with the gift of the land, built the temple in 1982 "as a place to benefit people in every country, according to what we believe. It represents ultimate peace and happiness — and the pacification of war and disease."

While many have heard of Tashi Ch?ling, few have visited — and the adherents try to be low-impact and low-profile, not getting on any tourist maps and opening only the garden of behemoth statuary and prayer wheels, 100 yards below the temple, to the general public.

The temple, in the main floor of the hillside structure, offers contrasts of great peace, the "tremendous energy" of the statues and a riot of red, gold, turquoise and many other unabashedly happy colors adorning thrones, altars, prayer wheels and walls packed with 13 centuries of sacred texts.

Facing meditators and students are a row of twice-lifesize statues, made by students from Tibet. They include the Buddha in lotus position with his hand pointing to the ground in his "earth teaching posture."

That's when Buddha refuted his enemy Mara who chided the master 26 centuries ago that, even if he had found the truth, no one else knows it. Buddha put his hand on the ground and, noted Thomas, replied, "I call on the Earth to be my witness."

Next to him is the Great Boddisatva, which means one who has attained enlightenment, but, out of compassion, chooses to stick around on the material plane to help others.

Then you find a rather stern, angry-looking fellow, Guru Rinpoche, regarded as the "second Buddha" — the one who is a warrior against evil deities and brought the religion to Tibet in the 8th century.

Bare-breasted White Tara joins the pantheon as the Mother of All Buddhas, holding a flower representing compassion and the female aspect of enlightened nature, says Thomas.

"Women like her," he notes, "and they do practices with her."

At the far end is Dorja Sempe, a couple seeming engaged in seated, facing lovemaking, but representing "Diamond Mind," the union of feminine wisdom and masculine "skillful means," says Thomas, who fled his Hollywood production design career years ago to live at the temple.

In the prayer garden below, a two-story Buddha is flanked by a huge White Tara on the left and Green Tara on the right, the latter representing liberation, as well as success in work.

The walkway to the statues is lined with cylindrical prayer wheels, each filled with books of prayers. When you spin them, they are thought to send the prayers out into the world. Rows of prayer flags on the property, he adds, do the same.

Thomas says the goal is to purify oneself, to benefit self and others, to have a meaningful life and to discover in oneself the Buddha nature that all beings have.

"It's not about converting anyone to this religion. People, if they have the karma, will make the connection to Buddhism," says Khandro. "Our guest books in the garden are filled with comments of people who come here from all over — Poland, Russia, New Zealand, Mexico — and say, of their whole trip, this was the most profound and peaceful experience."

-----------
Those interested in using the temple for meditation or attending classes should go to www.tashicholing.org/general_information.htm.