Logan City, Utah (USA) -- A pile of shoes lays next to the door inside Logan’s Faith and Fellowship Center Monday and Tuesday nights when a group of 10 barefoot individuals form a circle in the dimly lit front room. 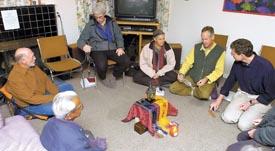 << A Buddisht meditation group meets together at the Faith and Fellowship Center in Logan. (Eli Lucero/Herald Journal)

Many sit with folded legs and gently closed eyes.

Two Buddhist groups (also known as sanghas) meet weekly at the center to meditate and study Buddhist texts and philosophies. By sharing experiences with one another they find new insights into their studies and strength in their practices.

Although there have been a few individuals in the valley practicing Buddhism for years, most were unaware any of the others existed. It wasn’t until the Dali Lama visited Salt Lake City more than five years ago that a few of them ran into each other.

They discussed starting a meditation group and exchanged contact information.

A few months later, as Buddhist follower Tim Slocum was selling coffee at the Gardener’s Market in Logan, he noticed someone wearing a Dali Lama T-shirt. He asked him about his unusual apparel and found that he too was interested in Buddhism. Shortly following their encounter, the group was organized by Slocum and others and weekly meetings began.

With no teacher leading the group, many of the meetings are focused around Buddhist writings, videos and audio recordings.

“We all stumble along together,” Jim Akers said.

Buddhism is considered both a religion and a philosophy. Although most who practice Buddhism consider themselves Buddhist, those of any faith can follow the philosophies.

“Buddhism is about living every moment and appreciating any moment,” Bobbie Cleave said.

While some members of the two groups are Buddhist, most come from an array of faiths and backgrounds.

“You can believe in any religion. Buddhist practices only strengthen your religious beliefs,” Jennifer Fallon said.

Buddhism began more than 2,500 years ago in India and is based on the teachings of Siddhartha Guatama, also known as Buddha. In contrast to the handful of Buddhist followers in Cache Valley, Buddhism is actually the fourth largest religion in the world with more than 300 million followers across the globe.

The Four Noble Truths are one of Buddhisms most essential teachings. The first is that there is suffering in life, the second that the origin of suffering is attachment — an attachment to worldly things and ideas, including the idea of ‘self,’ all of which are impermanent. Because of their impermanence, loss is inevitable, thus leading to suffering.

The third truth is there is an end to suffering. It is possible to end suffering by essentially ridding oneself of attachments, desire or the pursuit of worldly things. The fourth truth holds that the end to suffering is attainable through what is called the Noble Eightfold Path, which teaches followers how to live. It directs followers on how to obtain the correct view, intention, speech, action, livelihood, effort, mindfulness and concentration necessary to end suffering.

In Buddhism, the primary way to reach the right concentration is through meditation. By releasing all thoughts, the mind is ready to gain insight into the nature of reality, let go of attachments and eventually obtain release from suffering.

During meetings, the group is led into meditation sessions by a small bell. When the quiet ringing finally dims, nearly all that is heard is one’s own breathing, allowing time for silence to help empty the mind.

“Our senses are so limited. We want to explain everything,” Kumar Math said. “We want to understand what God is, but it’s only possible when thinking ceases, which allows for emptiness.”

According to Buddhist philosophy, in order to end suffering, one must also let go of ego and self-centeredness and make themselves empty, ready to be filled with compassion.

Akers, who has been with the group for four years, said the sessions help.

“I get along better with the world and myself,” he said.

The members of the group look forward to the time they have to meet together after spending a week in the busy world.

“Our culture is so unhealthy and superficial,” Cleave said. “It’s hard to go out into it each week.”

Meditating and studying together gives the group a grander view of their existence, and according to Koerner, the practices help members get beyond the normal way they experience life. Coming together helps create a comradeship and support system.

“It’s easy to get derailed when you do it by yourself,” Koerner said.

Amid all of life’s suffering, Buddhism holds that happiness can be found through the practice of the Eightfold Path. According to Buddhist beliefs, Nirvana, the highest happiness, is attainable in this life. It is a state of being where one is free from callings or attachments.

“Nirvana is here, now. I can experience a millisecond of it here,” Teresa Thompson said. “And hopefully those moments stretch out into longer periods of time.”

According to Cleave, Nirvana is a two-fold path: mediation, which is letting go of oneself, and compassion, giving oneself to others.

“There is no destination, it’s about now. It’s about being in the present moment,” Koerner said. “ … You really have to train your brain. It takes practice.”

According to the group, Buddhism is the study of ones mind and heart and allows them to come to understand themselves and others better.

“It is getting to know yourself in a very deep way which helps you function more richly and experience more joy and serenity,” Koerner said.

The meditation groups are open to all who are interested. They meet at 7 p.m. Monday and Tuesday in the Faith and Fellowship Center at 1315 E. 700 North in Logan.