Bringing Buddhism to a wired Seattle

Lama uses English -- and a Blackberry

Seattle, WA (USA) -- Sure, it's possible to point out tenets in Buddhism and physics which hold that time is relational, relative and impermanent, but it hardly ranks as an acceptable excuse when a guy is running late. 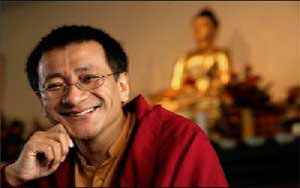 Or when a humming BlackBerry won't permit the calming of the mind.

Such is the nature of the path traveled by Dzogchen Ponlop Rinpoche, a lama, a teacher and an India-to-Fremont transplant who is formally adapting Tibetan Buddhism to American culture -- more specifically, a wired, caffeinated Seattle that sometimes wishes Enlightenment would jack up the bandwidth or maybe just text:

"There is a lack of patience in 21st-century culture," Rinpoche said, sitting in his office in Nalanda West, a Buddhist center a stone's throw from the Aurora Bridge. "We get stimulated, encouraged to do everything faster. It can be difficult."

As Rinpoche says this, a smile is tugging at the corner of his mouth, impishness pooling just below the surface for one of the nation's highest-ranking Tibetan Buddhist scholars.

Thin and younger-looking than his 42 years, tech savvy and gently ironic, Rinpoche (rhymes with "ricochet") delights in his quest to blend the ancient and Asian with a hurried, varied, scattered nation.

Buddhism needs a distinctly American sect, he says of the work he is doing here in Seattle. And America, open-minded and ever-adaptable, is perfect for Buddhism.

"Buddhism is a pure water of wisdom and compassion," he said. "It has no form or shape. It takes the form of what you pour it into."

And that American form is what? Supersized?

Rinpoche laughs. No, he said, not necessarily.

It's his quest to figure out what is American culture and how to teach Buddhism to it. Rinpoche (and other Buddhist scholars in the U.S.) have been adapting traditions nearly 3,000 years old to a culture with far different expectations than what he had as a child in Sikkin, India.

He entered the monastery at age 5 and soon was recognized as a future lama. Buddhism was woven into everything he learned. That is a much different experience than for a Belltown genetic scientist who walks into the center as an adult.

Teachings in the Rumtek Monastery, vital for Rinpoche's childhood development, wouldn't make as much sense to an American. Within the Nalanda West center, chants are in English (heresy to some purists) and bowing is optional. Rituals are explained early, literally, rather than learned through years of practice. Breathing and meditation are an immediate focus in America. The process of calming the mind isn't as vital in Asia.

Social problems differ, too. For example, a lama here must be able to talk about depression. "I had not seen that as a big issue before coming to America," he said.

And a spiritual leader here must understand the effects of an aggressive culture. Lectures and lessons are placed on CDs and bundled for MP3 players.

"The technology is something we have to embrace," he said. "It allows us to reach people. We put as much information online as we can."

As Rinpoche said this, his Blackberry buzzed. He glanced, resisted picking it up and resumed. He's been teaching in Seattle six years now, after some time in Boulder, Colo. He first traveled to America at 14 with his instructor. He marveled at New York but came away feeling there wasn't much difference in the human condition between the two countries.

But when he returned to the states in 1991, he began to pick up the distinctions. The American axiom, or assumption, is different, more individual, more optimistic, less contemplative. He and friends decided that these adaptable Americans needed a Buddhism adapted to them.

It remains, he said, a work in progress. Sure, there are critics who say chanting in English is less holy than in Tibetan. But to them, Rinpoche asks: As the original texts are in Sanskrit, why is the Tibetan language any more holy than English?

You see, he said, it's always been an adaptable religion, ready to take the form of its host. Now, if he could just get the hosts to slow down for a sec.