Tukwila teen a monk no more

Michael Sa-Ngoun came home a Buddhist monk in November 2006. He since has given up his robes and vows, and his aspirations now include buying a new car.

Seattle, WA (USA) -- Michael Sa-Ngoun is no longer a monk. 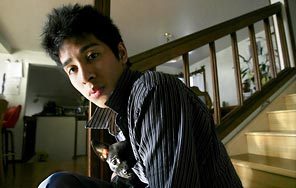 The 19-year-old from Tukwila, who spent two years in a Cambodian monastery because his mother was desperate to stop his self-destructive behavior, is not prone to deep philosophical meditation these days.

He doesn't work very hard to resist the desires of most young men his age, nor does he seek humility at every turn.

It took surprisingly little time, family members say, for him to turn back into a regular American young man after his return from Cambodia a little more than a year ago. He was profiled then by The Seattle Times.

He now works at a car dealership because he likes to make money, but he doesn't know what he wants to do for a living.

He stays out too late with his friends, wastes too much time watching movies, and spends too much money at restaurants, he says. He also doesn't keep his room as clean as his mother wants, nor does he do his chores without being asked.

But he hasn't been in trouble with the law since his return, and some of the things he learned while living the austere life of a monk have stuck with him. He said he still believes in karma, and he does his best to do right by others. He'll capture an ant and release it outside rather than kill it.

"I really do believe in that part, and I try hard not to do anything that hurts someone else," he said.

His mother, Chou Sa-Ngoun, said she was disappointed when most of Michael's enlightened behavior quickly gave way to the material world.

"I wish sometimes that I wouldn't have brought him back from there until he was past a teenager," she said.

But she thinks she may have saved his life. And basically she's OK with how things are.

The issues her family faces now are typical of those of other families with teens, and not the dangerous behavior she once feared.

Says Michael's stepfather, Sanny Sa-Ngoun: "These problems, I can live with. The cops aren't coming to the door."

Left at a monastery

When Michael was about 12, he started skipping school, hanging out with the wrong kids, trying drugs and getting arrested for petty crimes.

His mother tried grounding him and taking away privileges like television and video games. She switched his schools, got him into counseling, let him pay his own fines after juvenile arrests and let him languish in detention centers.

She called the Army, but her son was too young then to enlist. She looked into disciplinary boot camps but found them too pricey.

She begged the state to place him in a temporary foster home, but was told the authorities could do nothing until he committed a more serious crime.

She was afraid he would die violently in a car crash, in a gang altercation or in a drug deal.

Then the couple hit upon an idea while planning a family trip to their ancestors' Cambodian homeland. Sanny Sa-Ngoun thought experiencing hardship would be good for Michael and suggested leaving him behind for a short time. A friend knew of a Buddhist monastery in the Kampong Cham region that would accept Michael as a novitiate if he took the vows of poverty and selflessness.

They flew in November 2004 to Phnom Penh, spent a few days doing tourist things, and made their way to the isolated village of Krolong, where Michael's mother told him he would remain until he had changed. Michael — who did not speak Cambodian or have any of his own money — argued, begged, went on a hunger strike and thought about running away. Finally, he gave up and allowed his head to be shaved and prayers said over him.

He spent the first few weeks in shock and despair before slowly settling into the routine.

In silence, he rose at 5:45 each morning, drew water and laid out rugs, place settings and towels for his teacher and the elder monk, whom he called "Grandpa."

He then set a place for himself and called his elders, and together they ate their meal of rice and meat or fish. He rested for 10 minutes and went to work on chores around the temple and school grounds.

He and the other young monks learned to mix mortar, lay stone and build fences. Alongside his comrades, he prayed and studied the teachings of Buddha, trying to learn to free himself from "wanting things," he said.

They washed at the pump or well, and then he and the other young monks set out door to door among the villagers asking for food in exchange for blessings.

His mother said he could return when he had earned his high-school diploma, which she arranged for him to do online from a nearby village he reached by motorbike once a week.

When he returned to Washington in November 2006, his head was shaved and he was wearing a flowing orange robe. He was nearly silent, and he honored the vows that forbade him from hugging his mother because she's female.

He was overwhelmed at first, he said, by the pace of American culture, the nonstop barrage of images and enticements, the construction, the speed on the freeways.

He wore his robes for several weeks, during which time he was invited to pray and issue blessings at local Buddhist temples.

Because Michael chose not to further pursue a life as a monk once he returned, he was released from his vows and his robes in a traditional cleansing ceremony.

When people found out about what Chou had done for her son, she was deluged with appeals for help from other parents and even went so far as to arrange trips to the village for a few people. But in the end, they all backed out.

"They got scared," she said.

She doesn't blame them. It was a hard thing for her to do, even with her knowledge of the culture and language.

Michael got a job working at a restaurant and then at a car dealership, where he details cars, moves them, runs some errands. He's thought about apprenticing as a mechanic there, but he's not sure he has the aptitude for engines. He pondered joining the National Guard for the college money, but decided he wasn't interested in more schooling.

His aspirations are not far-reaching.

"Really, I just want to have fun with my friends and get a new car," he says.

Though Michael and his mother sent money and care packages to the monastery for a few months after his return, it's been a long time since the last one.

"I try to call them sometimes, but there is something wrong with their phone," he said.

Michael's mother is sometimes disappointed, after all that he's been through, that he didn't retain a higher level of discipline and consciousness.

"He's slipped," she said one day this month when his room wasn't clean and his chores were undone. "I feel like he hasn't changed that much. Sometimes I think there is something missing in his brain, but then I remind myself that I shouldn't overreact. He's just a teenager with a teenage brain."

Michael dates a 17-year-old girl who has "strict parents," and he stays away from the drugs and friends that got him into trouble before, he said.

"I just stay away from the law, and everything else is easy," he said.

Because he has stayed out of trouble since his return, he will be able to petition the court soon to expunge his juvenile criminal record.

He said he doesn't know exactly what to think now about his time in Cambodia. It seems like a long time ago, in a way, and part of it seems like a dream. He thinks he might have straightened up on his own by now, but also that he might have a longer criminal record if he hadn't gone to Cambodia.

His experience may have acted as a deterrent to his younger brother and sister, who don't want to follow him down that path.

"They don't want to be left in Cambodia," he said.

His mother feels like she did the best thing, trying to shelter him during what she saw as his most vulnerable time. Now she's trying to stop worrying and let him make his own mistakes.

"I guess I'm going to have to. He doesn't really know what life is about, but he won't know until he finds out. We can steer him, but we have to let him fall."