Peace found in relics of the Buddha

KAHULUI, Hawaii (USA) -- Charmaine Rugg felt a sense of serenity as she viewed the display of the pearl-like crystal relics of the Buddha and Buddhist masters. 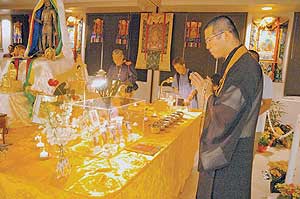 << The Maui News / AMANDA COWAN photo
The Rev. Kenji Oyama offers a prayer as he participates in the opening ceremony for The Heart Shrine Relic Tour on Friday night at Maui Community College.

“I felt extremely calm. It was like nothing I ever felt before,” the 13-year-old said Friday night.

“It was amazing,” said Barbara Gach of Kihei. “It was was such an honor to be in the presence of these relics.”

Rugg and Gach were among several hundred who packed the classroom turned into exhibition hall for opening ceremonies for “The Heart Shrine Relic Tour” at Maui Community College.

The spiritual and cultural exhibit touring worldwide aims to foster loving kindness with the rare and sacred relics that were left behind after the bodies of spiritual masters are cremated.

The pearl-like crystals and other fragments that were found among the ashes are believed to represent the inner purity of the individual who had passed on. The objects are considered spiritual rather than physical remains that are intentionally left behind by revered masters such as Shakyamuni Buddha, who lived 2,500 years ago in Nepal.

The historical Shakyamuni was born a prince, Siddharta Gautama, but after seeing so much suffering in the world he left his wife, son and lavish lifestyle and went on a spiritual quest to seek the truth.

It was under a Bodhi-tree in north India that he divined the truth and became a fully enlightened Buddha.

The collection is made up of remains of Shakyamuni Buddha with relics of other holy disciples and Buddhist masters. It drew an overflow crowd to the MCC hall, including three generations of Charmaine Rugg’s family, who was with her mother, Jeunesse Francis, and grandmother, lesslie Williams.

Williams of Kula said it doesn’t matter what you believe in, the relics will have an effect on you.

Although Williams is a member of the Maui Dharma Center and said she was best friends with the late Venerable Lama Tenzin of the center, she had thought she wouldn’t feel anything special as she viewed the relics — crystalline objects as small as a pin head.

“I was surprised,” Williams said. “I really felt a connection to the actual people who have been praying for me my whole life.”

Even if she had not expected a special feeling, Williams felt the event was a rare opportunity, coming with her family and friends to the exhibit that will never be repeated. The sacred objects are to be placed within a new statue of Maitreya Buddha under construction in Kushnigar, India.

“The blessing was in the room,” said Francis. The women said they found it amazing that the relics have been preserved and passed down for thousands of years.

Williams said it was like having several holy grails in one room.

Setsuko Hara, wife of the Rev. Gensho Hara who participated in the program, said in Japanese that she had a “good feeling” as she saw people of many religions all praying together.

At the display, photographs of the Buddhist leaders accompanied the relics that were placed on tables decorated with candles, flowers and water. The walls in the exhibit room were lined with colorful tapestries of the Buddha and the faint scent of incense lingered in the air as a recording of Buddhist chanting was played.

During Friday’s opening ceremony, prayers and blessings for world peace were offered by priests, kahu and spiritual leaders of many different beliefs including Hawaiian, Native American, various Buddhist sects and Christian.

Women in traditional clothing danced to reflect “The Eight Precious Offerings” to the relics.

While the blessing ceremony ran for more than an hour, the audience packed the room, standing against the walls, sitting on the tiled floors or waiting outside the room.

“The relics act as the focus of bringing people together in the spirit of friendship and love and kindness.”

After the exhibit on Maui closes today, the tour will move on to Taiwan then to Korea.

On Oahu, where the tour was presented before coming to Maui, organizers said the exhibit attracted 3,000 viewers.

When the tour is completed, the relics will be permanently enshrined in the heart of a 500-foot-high bronze statue of the Maitreya Buddha. Hence, the name, “The Heart Shrine Relic Tour.”

Carmen Straight, custodian of the relics, asked the crowd to pray, saying that in the Tibetan calendar, on some days, prayers are multiplied, as it will be over this weekend.

For those attending, she added, there is a spiritual benefit in just being there. Shakyamuni Buddha said that seeing his relics were the “same as being in the presence of me.”