WINCHESTER, CA (USA) -- It's an unlikely setting for Buddhist monks native to Southeast Asia. In a rural neighborhood near Leon and Scott roads - between a recreational vehicle storage lot, horse corrals and an empty field - two monks live a devotional existence, their days full of meditation, study and prayer. 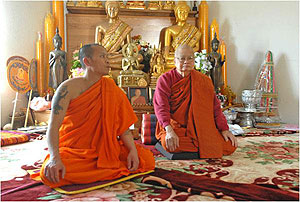 << Buddhist monks Sommay Khounborin, left, and Saveuy Khamphoukeo of the Rattanamoungkhoun temple on Leon Road talk about their life on the Winchester property and discuss their religion this week as they sit in front of the temple's altar.
STEVE THORNTON Staff Photographer

The temple of these Laotian-born monks consists of a small blue and white manufactured home. Upon a closer look, one sees two colorful Buddhist flags flying out front and a shrine in the middle of the 5-acre property.

The Rattanamoungkhoun Temple is not purposely obscure, and when the orange-robed monks are out front, it's obvious it is not a typical household. It's just that worshippers at the 2-year-old temple have yet to be able to afford to build a more traditional structure, said the head monk, the Venerable Saveuy Khamphoukeo.

The monks practice Theravada Buddhism, the form of the religion that predominates in Sri Lanka as well as Southeast Asia. The temple serves about 200 people, the majority being natives of Laos, Thailand, Cambodia and Vietnam, he said. Other regional temples serving Buddhists from Southeast Asia are in Moreno Valley, Riverside and San Diego County.

Worshippers are welcome at the daily chanting and prayer sessions in the morning and at dusk, Khamphoukeo said, but it's the monthly celebrations that draw more of a crowd.

They are held behind the home in an area with a concrete floor shaded by a large awning. The next festival is Sunday when, according to the temple's other monk, Sommay Khounborin, there will be a recitation and celebration of the story of Pha Vet Sandone. Translated from Lao, it means Prince Vessantara, who is the next to last reincarnation of the Buddha and is regarded as a symbol of charity.

During a recent interview, Khamphoukeo sat calmly on the floor of the temple's main room, which is covered by thick rugs. Shoes are left at the door, and just inside are two large gongs. An altar fills a corner, covered with golden and bronze statues of the Buddha rising above candles and flowers and other offerings at its base. Temple members were cleaning up from a lunch they had prepared.

Tradition, Khamphoukeo said, prohibits the monks from cooking their one daily meal, which is served in late morning. They also cannot touch a woman, even to shake hands, and they earn no salary. Temple members bring food and other offerings, he said.

Khamphoukeo, 74, said he was a captain in the Royal Laotian Army for 25 years until communist forces overran the tiny land-locked nation and the U.S.-backed royalist government collapsed in 1975. After a spell at a camp in Thailand, he came to the United States in 1979.

Khamphoukeo said the conflict he went through in his country was one of the experiences that sparked his desire to study religion and to teach it.

Khamphoukeo said he has eight children and eight grandchildren, some of whom live as far away as Laos and France, but the life of a monk requires leaving most family life behind, he said. His family can come to visit him in the temple, and a daughter who lives in San Diego comes to visit him about once per month, he said.

Khamphoukeo entered the monastic life 17 years ago after some consideration of other religions, he said. During his 1-year stay in Thailand, he learned about Catholicism, he said, and then after arriving in San Diego, spent 3 years attending a Christian Church, before going to Utah and studying The Church of Jesus Christ of Latter-day Saints.

He decided, however, that he wanted to devote the rest of his life to studying and teaching Buddhism. The religion was founded on the teachings of the historical Buddha, who lived more than 2,500 years ago in ancient India.

The principal tenets are that all beings are born into suffering and that by understanding what that means and following certain moral precepts and practices, including doing good deeds, one can eliminate suffering and attain nirvana, a divine state of enlightenment.

That, Khamphoukeo stresses, is not much different than other religions.

"If you perform the merits, you will go to heaven," Khamphoukeo said. "Any religion that teaches people is very good. If you do good, you go to heaven."

By cooking and cleaning at the temple on a recent day, Ly Singthong was making merit. Singthong, a Murrieta resident and native of Laos, said she used to drive to a temple in San Diego until the one on Leon Road opened and she's pleased it is so much closer to her home. She said she comes to cook almost daily.

"They cannot cook, and I like to take care of the temple," she said. "All the people need blessings."

Before leaving for the day, Singthong bowed toward the altar, and dropped a donation in a container near the back door.

Aside from teaching at monthly events, the monks chant, pray, study and meditate daily. They venture out frequently to conduct house blessings. A white board in the temple lists the dates and addresses of upcoming blessings.

Khamphoukeo says he also counsels people and prays for their concerns, when asked to do so, and always prays for an end to conflict in the world. He said several families have come to him in the last two years as their sons and daughters prepare to deploy to Iraq.

Khounborin, 39, has served as a monk for three years. He said he immigrated to San Diego from Laos in 1984 and feels blessed to live the life of a monk.

"As a monk I can meditate and learn about Buddha," he said. "I'm happy, of course. I can do what I love."

# What: Buddhist festival commemorating the life of Pha Vet Sandone, or Prince Vessantara