Chico Creek, CA (USA) -- The balconies in the Bell Memorial Union were lined with hundreds of people of all ages trying to get one last glimpse of a Buddhist sand painting before it was taken apart Saturday. 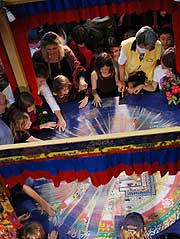 << Onlookers push the sand toward the center, representing the impermanence of life, in a closing ceremony.
Media Credit: Stephanie Tombrinck

The Kalachakra mandala, which was made by Tibetan monk Losang Samten, was dismantled, distributed to onlookers and poured into Chico Creek in a closing ceremony.

This tradition is performed as a benefit for blessing the environment and marks a beginning to the mandala's meaning, Samten said.

"The Buddhist point of view is everything is impermanent," said Samten, who worked on the painting nearly every day since Jan. 29.

He has painted mandalas across the country at museums and universities, and the Kalachakra is a symbol that promotes peace, the environment and education.

Junior Tristan Reaper, a music composition major, was amazed when he saw the final design, he said. He became interested after he saw Samten working on it the first week.

"I came back every couple days to see how it progressed … I thought it took dedication," Reaper said. "That's one of the reasons why I came today."

A man with a long, braided ponytail played a stringed instrument and sang in Tibetan to begin the ceremony.

Samten led the audience through a Buddhist prayer sung to the tune of "Amazing Grace" and thanked students, the university and the community for supporting the event.

Audience members and event coordinators took turns brushing the sand toward the center of the table, mixing the design into a colorful pile.

Onlookers who were allowed to take some of the sand home with them, walked to the Bidwell Bowl Amphitheater at Chico Creek, which was decorated with pink flowers. The rest of the sand was poured into the creek as Samten said a prayer.

He then hugged his helpers, said another prayer, laughed and ended the ceremony with some music played on horns, bells and percussion.

Elizabeth van Hoevenberg, who worked with others to help promote and organize the event, has been selling merchandise and giving information to mandala visitors for the past six weeks. She said the long hours at the table can be hard work but are spiritually rewarding in the end.

"I like to explore different religions, different walks of life," she said.

Samten has enjoyed talking to students and hopes his painting has helped teach the importance of patience, he said.

He went home Sunday to Philadelphia, where he has built mandalas in the past. He said during his time in Chico, people from his hometown became jealous of the Kalachakra, which is rare to see, because it's so difficult to paint.

"They say, 'You did that in Chico? Why don't you do one like that in Philadelphia?'" Samten said. "This design is very special."

He hopes to make another sand painting, a Mandala of Compassion, at Chico State in two years.