Monterey, CA (USA) -- About 20 priests, students and residents maintained battle lines Thursday in the Ventana Wilderness area of Los Padres National Forest to defend the oldest Buddhist monastery in the Western Hemisphere against flames that were about 1½ miles away. 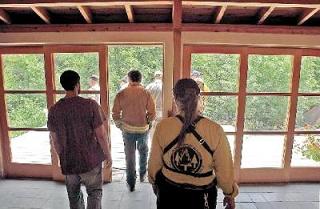 << Firefighters get a tour of the Tassajara Zen Mountain Center. (VERN FISHER/The Herald)

The Monterey County Sheriff's Department evacuated about 75 guests from the Tassajara Zen Mountain Center on June 23, and another 33 chose to leave two days later, said David Zimmerman, director of the monastery and resort.

The 14 who remained have since been joined by six others, and are staying despite the mandatory evacuation order. The 20-person crew has been asked to provide authorities with the names of their dentists for identification purposes.

"But we're feeling fairly confident here. Every firefighter who has come in and seen what we've done has told us the complex is defendable," said Zimmerman, who has been among those on the front lines, trenching out 10-foot-wide firebreaks, rigging makeshift sprinkling systems, and clearing leaves and other highly flammable materials from the area. "This is our spiritual home. It is a very precious place to us.

"There is definitely a feeling of concern, and I think there might be a level of fear. Our practice, though, is to acknowledge fear, but not let it take over," he said. "We focus on what needs to be done this very moment, whereas fear is something that is based on future possibilities. Fear is not beneficial because it is based on the future."

A large measure of worry has been quashed by the enormous level of preparation the volunteers did in the eight days after the evacuation, during which they rose at 5 a.m. and worked into the night, breaking only for food.
Professional firefighters showed up last week, helping prepare fire lines and teaching fundamental fire-fighting techniques. One fire marshal and two former fire marshals are among the 20 who are still there, waiting for the fires to arrive.

"As of (Wednesday), we were able to allow people more time to rest," said Steve Stuckey, a San Francisco-based abbot who has come to Tassajara to help. "Our regular monastic schedule of meditation was interrupted for a few days, but we're now able to resume that schedule, which is part of the spiritual practice that sustains us."

Twice-a-day meditation periods now are interlaced with testing the fire hoses, maintaining the temporary sprinkling systems, clearing leaves and branches, training in firefighting techniques, hosing down buildings and nearby foliage and monitoring the fires.

Water is abundant, Zimmerman said, thanks to the nearby Tassajara Creek and the 50,000-gallon swimming pool at the complex.

Winds and other factors could make the fire a more immediate threat at any time, but firefighters have told the Tassajara crew that the flames most likely will approach slowly.

"We've been told that they'll probably dribble down on us, rather than hit us in a hurry," said Leslie James, senior practice leader at Tassajara. "The 20 people who are here right now very much want to be here. Everyone who wanted to leave is already gone. In fact, there have been more people from the outside who have asked to come in, but we've chosen to keep the group at a more manageable number."

The Tassajara Zen Mountain Center was established in 1967, when the San Francisco Zen Center bought the 160-acre property — formerly a hunting lodge — and renovated its rustic stone and wood buildings. The complex is exclusively a monastery for half of each year, but is otherwise supported by revenues from a four-star resort that offers gourmet vegetarian meals, a hot-springs bathhouse and cozy cottages that may be rented for up to $325 a night.