Campbell, CA (USA) -- Buddhists and non-Buddhists, believers and those who were a bit skeptical gathered at the Gyalwa Gyatso Buddhist Center in Campbell over the holiday weekend to get a glimpse and maybe a blessing from the sacred relics. 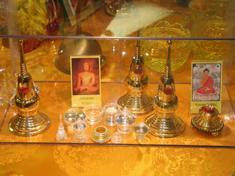 The collection of more than 1,000 relics, found among the cremation ashes of Buddhist masters, has been touring the world since 2001. The relics made a stop in Campbell on July 5 and July 6, which was also the 73rd birthday of the Dalai Lama, the spiritual leader of Tibetan Buddhism.

The relics resemble small, round pearl-like crystals typically white in color, although some have reported they change color. They are thought to carry a spiritual quality with them, bringing health and wisdom to those they grace.

"The belief is that the compassion of Buddhist masters consciously created them at the time of death, which is an example of what they're trying to achieve their entire lives," said John Boley, a volunteer at the center.

Boley said a steady stream of visitors viewed the relics. The center offered blessings, in which the relics were gently placed on the crown of the heads of visitors. Dogs and cats were welcome to receive blessings as well.

"Everyone seemed to have that sensation. They moved a lot slower and were a lot less agitated," Boley said. "It's hard to describe the sensation, but you just feel it."

The balanced flow of visitors added to the already calming environment of the center, said Pat Prickett of Santa Clara. Prickett credited the relics along with soothing music and chants to the peaceful atmosphere.

Prickett said the relics are believed to also have some kind of healing power.

"I know a couple people who were having sickness in their lives, and they seemed to be healthier when they left than when they arrived," she said.

Boley said the relic tour is part of the Maitreya Project. After making their way around the world, the relics will end up enshrined in a 500-foot bronze statue of the Maitreya Buddha in Kushinagar, India. The project aims to bring the concept of loving-kindness to the world, a value embodied in Maitreya.

At the forefront of the project are the relics.

Campbell resident Donna Babuska volunteers at the center as its spiritual program coordinator. She said the relics have special meaning to her because two of them were derived from Buddhist masters she's studied.

"For me, it was very overwhelming because I feel Buddhism changed my life since I started studying it. I'm a more calm, open-hearted person," Babuska said. "Without the Buddha, all the things that have helped me change would have never happened.

"I've done other religions, but nothing really approaches the mind and the heart like Buddhism. It gets into the inner place, and it's not contrived."

Venues across the country may request the relic tour visit their location. Last year the tour stopped in San Francisco.

The relics will be on display in San Jose at the Chinese American Mutual Association, 1669 Flanigan Drive this weekend. The opening ceremony is at 7 p.m. Friday, and hours of the tour are 10 a.m. to 7 p.m. Saturday and Sunday.