A Buddhist Farm Offers A Place Away From Money, Stress And BlackBerrys

Sausalito, CA (USA) -- "When I came here, I was really having a hard time. I had so many clothes. And if I would give some away, it would be painful, 'cause I was so attached to them." 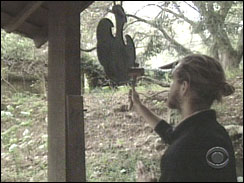 Green Gulch Farm is a Buddhist retreat. Fifty people live here. Others come for a few days to few months.

"My mother calls this Buddhist camp," she laughed. "She's like, 'I'm really glad you're happy there at Buddhist camp.' And you know, it kind of is."

Here, she says, you can forget a common fear.

"A fear of, you know, I won't be okay until I have x number of dollars. And like how much is that? You know? And like, what do you need it for exactly?"

Of course even Green Gulch needs some money. It sustains itself by hosting conferences and retreats, and by selling some of what is grown here.

Green Gulch Farm is just a few miles from the Golden Gate Bridge. Behind the rolling hills is a world of wealth and sky-high real estate. A little further south is Silicon Valley, generating wealth at a startling pace. But for some high achievers who head over these hills, Green Gulch Farm has become a place to step out of the fast lane.

Simon Turkalj is a Silicon Valley venture capitalist, a job with high rewards and high intensity: "What's wrong with intensity? You know what? It's called being obsessed."

He's become a regular visitor to Green Gulch where he gets a different perspective on prosperity.

"People do not come to Green Gulch to get rich. Actually, the term is you're a 'downwardly mobile Buddhist.'

"It's actually easy to make money. To do it with values, I think that's a little bit more challenging."

Valorie Beer has left Silicon Valley …and money … totally behind. She says she's a lot happier without a paycheck.

"Weeks go by when I don't touch money. There's nothing to buy here!"

She spent years in high-tech, at Apple, e-Trade, Netscape … always moving up the corporate ladder.

Her answer was Green Gulch.

Three years ago this once hard-charging executive became a Buddhist priest vowing never again to work for money.

"And in my ordination ceremony when my teacher shaved my head I felt that I finally became who I came to this life to be."

"I felt beautiful for the first time in my life!"

Her job now is to practice patience. Instead of a neighborhood of expensive homes, she lives in a room not much bigger than her bed: "Zen home sweet home!"

Meals are in the communal dining hall where talking is banned for the first ten minutes. The idea in all things here is simplicity.

Lisa Strauss is a lot less anxious about being in the latest fashion.

"I'm noticing, just being here, that I don't get so upset about it anymore, like I don't have to go out shopping."

"Sometimes I walk around singing, 'It's a beautiful day in the neighborhood,' like walk up on the hills and look down at the farm. And, you know, it just kinda looks like "Mister Roger's Neighborhood.'"

Everyone is called to meditation twice a day, each time sitting in silent reflection for 40 minutes.

How many e-mails could Beer have handled in 40 minutes in her previous life?

"Not ever enough, right? There is never enough time. There were always more e-mails and always more phone calls. And one of the recommendations that I have is if you're gonna do meditation, don't put it on your to-do list. Don't put it in your BlackBerry."

Valorie still spends time at a computer (they do have a Web site and broadband access), as assistant to the abbot or spiritual leader. She says Green Gulch is a great place to sit out the recession.

"My heartbeat is slower, my cholesterol is down 40 percent and I'm really happy."