San Jose, CA (USA) -- Walking toward the Watsonville Buddhist Temple on Sunday would make most anyone hungry. 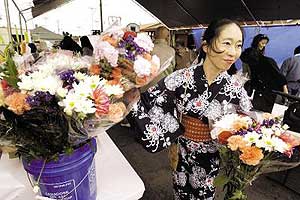 More than 200 people, many of them Japanese Buddhists, their family members and friends, gathered at the Bridge Street temple to celebrate the Obon Festival.

They did so by feasting on traditional Japanese cuisine, mingling with old friends and relatives, watching Japanese folk dancing and paying respects to departed loved ones.

Obon is an annual Buddhist event in which practitioners honor their ancestors. In Watsonville, it's held every third Sunday of July. It is believed that each year during Obon, spirits return to this world to visit their living relatives.

The temple's minister, the Rev. Shousei Hanayama, called Obon a time of joyous celebration, "a time to show gratitude for our ancestors who ... gave us the gift of life."

Obon is based on a Buddhist text that describes how a devout monk dances with joy upon successfully releasing his deceased mother's spirit from the Realm of Hungry Ghosts. To celebrate this occasion, Buddhists offer food in front of the temple's altar and dance, rejoicing in the enlightenment offered by the Buddha. It's been celebrated in Japan for more than 300 years and has been celebrated in Watsonville for 102 years, Hanayama said.

"It's nice for us because we grew up with the temple and attended it as children," said Lisa Sakae, a Watsonville resident. "So now as adults, we have our own children and families, and we want them to experience it."

Watsonville resident Gerry Kondo said Obon offers temple members a chance to get together, have some fun and raise money for the temple.

Strolling through the temple's social hall offered a view of crowds of hungry people, waiting in line to choose from a tasty lineup of sushi, udon, teriyaki chicken, shish-kabobs and more.

"We like to show our appreciation by eating and dancing," Hanayama said.