The deal ends a two-year legal battle between a Vietnamese congregation and the city over a plan to build a temple on Chapman Avenue. The city had said the site of a former medical center was inapprop

Garden Grove, CA (USA) -- After a two-year legal battle with the city of Garden Grove, a Vietnamese Buddhist congregation has won a settlement paving the way for a 10,000-square-foot temple to be built on the site of a former medical building -- a spot the city had claimed was inappropriate for a church. 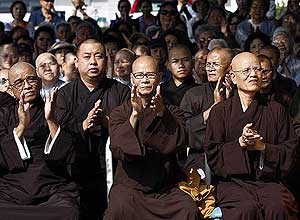 << Allen J. Schaben / Los Angeles Times
Members of a Vietnamese Buddhist congregation announce plans to build the long-awaited Quan Am Temple under the terms of a settlement with the city of Garden Grove. The temple will be 10,000 square feet.

The congregation, known as the Quan Am Temple, joined the American Civil Liberties Union in filing a federal lawsuit in 2006 accusing city leaders of unfairly barring the Buddhists from holding services and expanding their worship center on Chapman Avenue next to a middle-class residential neighborhood.

The ACLU described the settlement as a victory for religious freedom.

"All we have wanted all along is to find a home where we could worship as we saw fit, as we could not do in our homeland," said Thich Dao Quang, the temple's 79-year-old abbot, who made 12 attempts to flee Vietnam after the communist government seized his temple there. He finally succeeded in reaching the United States in 1988.

"I actually became extremely ill because of this," he said through a translator, explaining that he has suffered high blood pressure and heart problems for the last two years. "Now that we have a resolution, I am hopeful that my health will improve."

He said his creed is to avoid strife, which made it "an extremely difficult" decision to sue the city.

"He was very personally conflicted," said Belinda Helzer, an ACLU attorney, speaking at a news conference Wednesday at the site of the future temple, where the settlement was announced. "On the one hand, he didn't want to have conflict. But on the other hand, he had a whole population of lay congregants that weren't able to practice their religion."

The congregation bought the 1.8-acre former medical center in 2004, but complaints from neighbors about traffic and noise prompted the city to bar services there. The city in 2005 rejected the congregation's request to build a 15,500-square-foot temple on the site, and in 2006 rejected a scaled-down plan on the grounds that it clashed with the residential neighborhood's "spirit and intent."

The abbot said the protracted fight with the city has left the congregation deep in debt. K. Luan Tran, an attorney representing the congregation, said it now faces the task of raising money to build the temple, estimated to cost at least $2 million. "It's like a vicious circle," Tran said. "Without a fully functioning temple, it's very hard to get people in to fund-raise."

In October 2006, after the ACLU filed suit, a federal judge ruled the Buddhists could temporarily hold worship services in the old medical building while the lawsuit was being decided. Congregants have been gathering for Sunday services, but the old medical building holds only 49 people, and some drifted away to temples in neighboring cities. The temple is expected to hold 300 people for services, with an adjacent monastery to house the abbot and about a dozen monks.

Susan Emery, the city's community development director, said the city has yet to receive an application for the temple and cannot guarantee that it will be approved, "but we will consider it favorably in light of this settlement."

She said the settlement, in essence, removes the city's objection to rezoning the Chapman Avenue property from "office-professional" status to the "residential" status that would permit the temple.

Tran said that if the application is approved, the city will pay $145,000 in lawyer's fees, and if it is rejected, the litigation will resume. He said the two-year legal battle was "very stressful" for the abbot. "We just want to get this thing behind us," Tran said.

Helzer said she hoped the city would approve the temple plans by the end of the year. She said the Justice Department launched an investigation into whether Garden Grove has violated the Religious Land Use and Institutionalized Persons Act, passed in 2000, which prohibits the government from using land-use regulations to thwart religious practice. The investigation, launched by the Justice Department's housing and civil enforcement section, could result in another lawsuit.

The Justice Department said Wednesday that its investigation is continuing.