A tug of war over Cambodian temple in Long Beach

Control of Wat Vipassanaram has divided monks and the board of directors, which transferred the temple's assets to an ambiguous nonprofit linked to a gnostic church

Long Beach, CA (USA) -- The story of how a man named Johnny Rhondo, the self-titled grand master of the Church of the Revelation, came to hold the charter to Long Beach's oldest Cambodian Buddhist temple is a curious one. 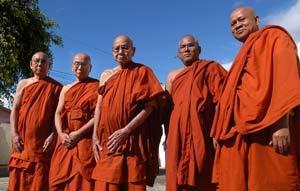 The Buddhist waton East 20th Street is the beloved, if dilapidated, nucleus for the nation's largest Cambodian community, co-founded by the late actor Haing S. Ngor and served by monks known to hew closely to ancient tradition.

The Church of the Revelation's address is listed as a post office box in Orange.

The sudden transfer of assets to an offshoot of Rhondo's church has split the Cambodian community, infuriated a Los Angeles Superior Court judge and even stirred anger among the monks, who devote their lives to avoiding such emotion.

"We're all human," conceded head monk Khoeun Pang, 70, sitting in the lotus position on the floor of his living quarters last month.

For months, two groups have warred over which was the rightful administrator of the temple, each side depicting the other as an interloper, partly along fault lines that have increasingly divided the community in Long Beach for years. Six of the temple's seven monks have taken one side; the nine members of the board of directors, now locked out of the temple, are on the other.

The board members say the monks have been manipulated by a group of activists to rise up against them in a bid to get the temple's money. The so-called insurgents, including two of the temple's founders, depict the board as politically connected, opportunistic big shots who wrested control of the wat from the laypeople.

The temple at the center of the dispute, Wat Khmer Vipassanaram, was founded in 1985 by Khmer Rouge survivors in a depressed part of Long Beach across from a Cambodian refugee assistance center.

Run by the nonprofit Khmer Buddhist Assn., the complex is a series of old Spanish bungalows and converted apartments next to an auto body shop. The founders hoped to save enough money to ultimately build a true temple.

"We wanted a place where we could have peace of mind, meditate and contemplate, so we could forget the trauma and nightmare of the Killing Fields," said Larry Sar, a co-founder who survived the 1975-79 Khmer Rouge genocide.

The association was preparing to break ground on the new temple when the dispute broke out in December.

The monks' faction demanded an annual election of the board of directors as required by the temple's bylaws, which had been ignored for more than a decade.

The board agreed to have an election on Jan. 27, but the plans became entangled in a dispute over who was eligible to vote. The monks' faction held its own election and chose a new board.

Observers in the Cambodian community say the conflict is part of a larger factionalism. Key players in the temple dispute previously squared off over a Cambodian New Year parade and the proposed designation of Cambodia Town in central Long Beach.

Members of the board are close to the city establishment and are key promoters of the parade and Cambodia Town. Activists behind the monks, including Paline Soth and Bryant Ben, argued that the Cambodia Town initiative was being run by outsiders with little input from the people who actually lived in the area.

The temple dispute landed in a Long Beach courtroom in February, and after an agreement by both sides, a judge appointed a receiver to take over the temple's assets until the issue was resolved.

But when the receiver demanded that the president of the association, Siphann Tith, hand over the temple's books, Tith told him he didn't have them anymore. He said board members had dissolved the Khmer Buddhist Assn. and transferred all the assets to a new nonprofit organization, this one chartered by Rhondo's Church of the Revelation.

According to its website, www.gnosticism.org, the church was founded in 1978, in Arlington, Texas, by Johnny Rhondo, whose real name is John Baptist Ramirez.

"He conceived the idea of a church without the limitations of walls," the website says. "A force that could reach beyond the confines of time and space and become one with the universe." Rhondo's church purports to follow the tenets of gnosticism, a set of beliefs that dates to the 2nd century, combining bits of Greek philosophy, Oriental mysticism and Christianity.

Ramirez was named by authorities as a key player in a health insurance fraud scheme in Texas in 2002, but he was not charged with a crime and denies any wrongdoing.

When Judge Joseph Di Loretto threatened to hold Ramirez and Tith in contempt of court if they did not comply with the receiver's demands, they sought relief in federal court with a unique legal argument: The Buddha himself, Siddhartha Gautama -- "who gave away all his wealth, property and even clothing, before he began the life that ultimately led him to become Buddha" -- inspired the temple's board members to dissolve their nonprofit.

In the Buddhism practiced in Cambodia, they alleged in court filings, all objects contain spirits, which are continually reincarnated in an endless cycle of life and death called samsara: "Only when the spirit learns all the 'life lessons' it is supposed to learn will it be able to break free of the cycle of 'Samsara,' and only then will the 'spirit' be allowed to enter 'Nirvana.' For this reason 'death' is only a doorway into the next life."

And so the venerable Khmer Buddhist Assn. had to die.

Although inventive, the argument proved unpersuasive to a federal judge, who sent the matter back to Di Loretto. He was visibly fuming at a hearing this month, when he tore into Tith.

"Wasn't the real reason you did that was to subvert the settlement agreement you reached with the defendants in this case?" he asked furiously.

Tith said no, but as he tried to explain again his religious theory, the judge cut him off, saying Tith had transferred the assets from a tax-exempt entity to an unincorporated group with no tax status, "a violation of federal and state law which the attorney general might want to look into."

He ordered Tith to bring every financial document to court or be held in contempt.

When Ramirez took the stand, Di Loretto took a quizzical approach, asking where he studied tax law (he hadn't) and if his church had an address.

"Are there any members in your church?" the judge asked.

"Each church has its own entity," Ramirez said. "The gnosis is in one person."

"It is a church of one," the judge offered.

"So your church is you?" Di Loretto asked.

The issue has become a legal morass, with at least six attorneys drawn into the fray. And four local Cambodian newspapers have amped up the rhetoric.

Sweety Chap, the editor of Khemara Times, said Soth and Ben "oppose whatever is good for the community."

"Now they came to destroy the temple," he said.

Narin Kem, editor of Serey Pheap, disagrees. He said Soth and Ben represent the majority of local Cambodians, while the board represents a business elite trying to usurp power and money wherever it exists in the community.

"They think the money of the temple is their money," he said. "If they were president of the United States, they would think they owned the U.S. as their own property."

Both sides are expected back in court today.