ADELANTO, CA (USA) -- In this windswept desert city, just north of Adelanto Airport, a 25-foot statue of a Buddhist bodhisattva said to have miraculous healing powers looms over Highway 395. 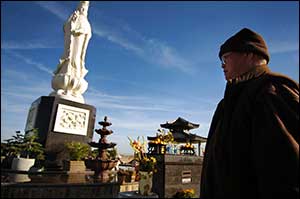 << Thich Dang Phap runs the Buddhist Meditation Center in Adelanto. Its 25-foot statue of Quan Yin, an enlightened being identified with compassion and mercy, is the main draw. Believers have said the statue has healing powers. The meditation center does not yet have a meditation hall, but Phap is raising money to build one. (Eric Reed/Staff Photographer)

Many believe Quan Yin's powers are stronger at this desert shrine than anywhere else. Worshippers claim to see a radiant white light emanating from the statue, usually accompanied by an arcing rainbow in the sky above. They say they've been healed of longstanding ailments.

For years, Nguyen said she has been unable to move her left arm without crying out in pain. Weekly physical therapy sessions, numerous medical examinations and an MRI couldn't determine a cause for her condition.

She heard about the temple and the "special power" the Quan Yin statue held there. So she went, returning again and again, sometimes two to three times a week, leaving bottles of water at the altar to be blessed by the bodhisattva.

"Fifty percent of the pain go away," Nguyen said. "I can go in backyard now and work. Everything's normal."

Presiding over the temple is Monk Thich Dang "Tom" Phap, whose secular name is Thao Nguyen (no relation to Hao Nguyen). Before entering the Dai Dang Monastery in San Diego in the late 1980s, Phap was a mechanical engineer in Flint, Mich., for Ford Motor Co.

As a captain in the South Vietnamese Army from 1965 to 1975, Phap oversaw the management of supplies before he was captured by the Viet Cong in 1975 and jailed for two years. After his release, Phap came to America and started a new life.

He said he bought the land in Adelanto about four years ago for $150,000, and moved to the High Desert from San Diego to start building the $15 million temple. It is being built solely on donations.

Standing 5-foot-1, Phap is small in stature but mighty in faith and ambition. His efforts have drawn attention from the Buddhist community on a global scale. He has received hundreds of thousands of dollars in donations from all over the world.

So far, donations have made possible the towering Quan Yin statue, said to be the tallest of its kind in the country, a reflecting pool beneath it, a 450-foot concrete walkway lined with 18 statues of bodhisattvas, and two gazebos.

On Jan. 4, Phap is planning a celebration at the temple for the two new gazebos, and he expects more than 2,000 people to attend.

A craftsman by trade, Lee Nguyen decided to volunteer his skills to the temple, assisting in the construction of the two gazebos.

He was intrigued by the stories of Quan Yin's powers at the temple.

"Her spirit - that's what draws people out there," said Lee Nguyen, 55. "People who go up there and pray, it seems like their wish is granted."

Like any community, the Buddhists who have pulled together to help Phap appear to share his dream of making the sprawling temple a reality.

"I don't think it's just the Buddhists themselves. A lot of people, if it's something that interests them, I think that's what they would do," Lee Nguyen said.