Adelanto, CA (USA) -- In this windswept desert city, just north of Adelanto Airport, a 25-foot statue of a Buddhist bodhisattva said to have miraculous healing powers looms over Highway 395. 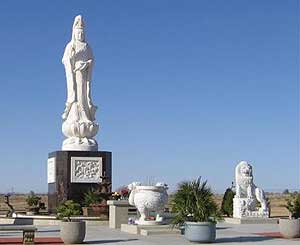 Thich Dang Phap runs the Buddhist Meditation Center in Adelanto. Its 25-foot statue of Quan Yin, an enlightened being identified with compassion and mercy, is the main draw.