No Parking Anytime: How a white New Yorker became a Buddhist minister

Seattle, WA (USA) -- The new minister at the Seattle Nichiren Buddhist Church was cleaning out the 80-year-old brick building in the International District just after he arrived a couple of months ago, when he found the building's secrets inside its walls. 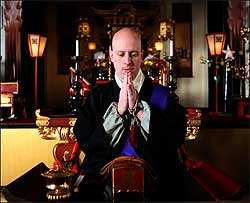 << The Rev. Kanjin Cederman is the new Buddhist minister at Seattle Nichiren Church

Hidden in a crawl space, he discovered Japanese flags -- dusty and apparently untouched since the early days of the U.S. entry into World War II.

Soon after, when electricians doing repairs broke through another wall, they uncovered old Buddhist texts bound in brown leather.

Sixty years later, he can only guess.

The books make reference to Japan's emperor, and the Rev. Kanjin Cederman, 33, thinks the congregation must have feared appearing too closely aligned with their homeland after the Japanese attack on Pearl Harbor.

The minister understands the fear of persecution, he said.

Seated in his office one afternoon last week, Cederman wore white socks and sandals and a black robe -- garb he replaces with a Shriner hat and Western clothes when he goes to his Masonic meetings.

Outside the temple, he has an affinity for wearing bowlers.

He has a particular style of speech -- his accent usually all New York -- like when he explains that he wears the robe at Buddhist ceremonies "to make people feel comfortable."

"Not that I should look pretty," he says.

But at times, he lapses into broken English.

"The scrolls I find in back," he says of the hand-painted lithographs that now hang next to a gold-colored shrine where he leads the practitioners in chant. The lithographs, imported from Japan when the church was founded, depict 13th century Japanese philosopher Nichiren, on whose teachings the branch of Buddhism Cederman practices is based.

"I think that (style of speech) is from my sensei," he says of his Buddhist teacher in Toronto. "He was Japanese, and sometimes it was hard to understand his English until you learned he was speaking his own kind of English. I think I go back into that when I'm in the mindset of what he taught me."

Like many spiritual journeys, his was roundabout -- with no clear explanation for what brought him to Seattle. He grew up in Buffalo. His father was Jewish, his mom Catholic, and Cederman said he wasn't raised with any faith in particular.

Still, as a youth, he found himself questioning the religious beliefs around him. "I remember thinking: If we were the chosen people, then how about everybody else?"

He wasn't particularly religious, but Cederman was into Aikido, and at 16 traveled to Japan to study the martial art with a Buddhist monk.

"The day I graduated from high school, I thought, 'I have to decide what kind of a person I'm going to be.' I thought of all the good people I'd known."

He thought of the monk and decided to go to China to become one as well.

After a couple of years, he converted to the Nichiren-shu branch of Buddhism, and studied in Toronto and Japan, before returning to Buffalo to start a small temple.

He was working on a graduate degree in English literature at the University of Buffalo, when he was offered the job of turning around a Seattle temple with an aging congregation.

His first step was fixing the building to invite back families who only visit for special events, but not services. That was how a Buddhist minister named Cederman came to revive an aspect of the temple's history.

The Japanese who hid the artifacts worried about fitting into their new country.

They called it a church, instead of a temple. And the minister there was always "reverend," he said, instead of the more traditional, shomin.

The building is a simple two-story brick with a long flight of stairs in front. "What does this building look like?" he said. "Does it remind you of a certain style? It's Masonic," he said.

Members, who are largely Japanese, have come to accept the white man from New York, said Kimie Kuramoto, head of the temple's women's group.

He has put the lithographs that used to hang next to the gold-colored shrine before World War II back up.