Los Angeles, CA (USA) -- One day in spring of 2007, the phone rang in the little Buddhist center in Long Beach that has been the focus of the Venerable Tenzin Kacho's life since she was ordained a nun by the Dalai Lama. 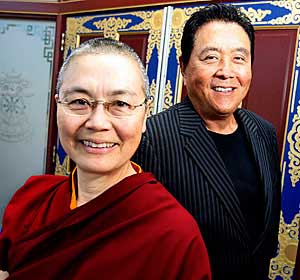 On the other end of the line was her brother, Robert Kiyosaki, a combat helicopter pilot in Vietnam who crashed three times and went on to become a globe-trotting entrepreneur and author of a bestselling book on personal finance, "Rich Dad, Poor Dad."

He was calling from his publisher's office in New York. There were some pleasantries, then Kiyosaki cut to the chase: "I've got a great idea for you. We're going to write a book together."

The book, he said, would be an inspirational blend of Eastern religion and business acumen told through their own experiences and conclusions about what is ultimately meaningful in life.

"It'll be great," said Kiyosaki, a self-described meat-and-vodka deal-maker who believes that peace comes after a fight. "We'll promote the book on a world tour. Eventually, you can start your own book series. I can see the titles now: Karma. Reincarnation. Compassion."

For Tenzin, a frail, soft-spoken woman who wears saffron robes and shaves her head, the idea seemed audacious. Peace, meditation and lovingkindness had been the bywords of her life at the center, an enclave of intricate altars, incense, votive candles and framed images of the Dalai Lama.

Yet, to hear her brother tell it, the endeavor would bring a double benefit: It would help self-centered business people -- such as him -- get in touch with their inner Buddha. And it would make a working woman out of her, and vastly expand the reach of her spiritual counseling.

Tenzin calls it one of the hardest decisions of her life. Only months earlier, Tenzin, whose secular name is Emi Kiyosaki, had undergone an angioplasty that left her with out-of-pocket medical bills totaling $17,000 and ongoing battles with what she calls "a really bad insurance company."

No surprise there. While seeking spiritual perfection, she had all but ignored practical matters such as researching adequate insurance coverage, creating bank accounts and earning an income.

Not anymore. Her collaboration with her brother resulted in publication this year of their book "Rich Brother, Rich Sister: Two Different Paths to God, Money and Happiness."

"Had Robert paid the entire bill and said, 'Just call me any time you need help,' " she said, "I'd not have learned some important lessons."

"At 60, I've gone back to work," Tenzin added with a smile. "In May I landed a job as a hospice hospital chaplain, working 20 hours a week."

She is also preparing to accompany her older brother -- he's 62 -- on an aggressive book promotion tour with stops in Singapore, Australia, New Zealand and Malaysia. Then they're off to a conference in Florida.

"It's been wonderful sharing my brother's world," she said.

Tenzin and her brother were raised in a family of Japanese descent in the small town of Hilo, Hawaii. Their father was the state superintendent of schools. Their mother was a registered nurse.

Kiyosaki joined the Marine Corps and served in Vietnam, flying in combat for a year.

"Life is not spongecake," he says. "It's cold, cruel and vicious."

Kiyosaki, sometimes collaborating with other authors, has turned "Rich Dad, Poor Dad" into a brand. Among the titles offering financial advice are Rich Dad's "Increase Your Financial IQ" and "Who Took My Money?" The latter has chapters titled "How to Find Great Investments" and "How to Be a Great Investor."

Tenzin's path has been far different. She was compelled by pregnancy to marry before completing university studies. After a few years, she divorced and lived in a geodesic dome in a forest. Later, she served as a Buddhist chaplain at the U.S. Air Force Academy in Colorado Springs, Colo.

Kiyosaki, who is based in Phoenix, follows the teachings and wisdom of architect, inventor, author and visionary Richard Buckminster Fuller. Tenzin is a disciple of the Dalai Lama and chose to forsake material wealth in favor of monastic life.

But now, as assistant spiritual director at Thubten Dhargye Ling Buddhist center in Long Beach, troubling new questions have been bubbling to the surface since her book was published.

"Am I selling out?" she asked. "What will the conservative monastic order think of me now?

"I take comfort in the Dalai Lama, who urges women to make the most of every opportunity that comes to them," she said. "The way I see it, I'm an educated woman and have many skills I can use to help others."

Kiyosaki could not agree more. "I can see it now," he joshed. "Tenzin Publishing Co., with its own attorneys and accountants."

Tenzin would not go that far. But she acknowledged that trying to strike a balance between spiritual ideals and practical realities has already produced some surprising compromises.

"As a woman with heart problems and new concerns about clean air and good ventilation, I burn shorter incense sticks indoors," she said. "And television producers want me to smile more."
TOP