Honolulu, Hawaii (USA) -- On Sunday, March 8, 2009 starting at 1:00 p.m. at the Pearl City Cultural Center, the students of the Pacific Buddhist Academy will present the 3rd Annual Taiko & Karaoke Festival, The Path to Peace. 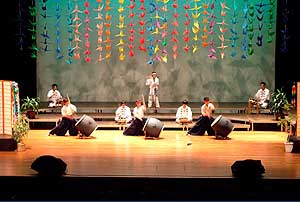 << On Sunday, March 8, 2009 starting at 1:00 p.m. at the Pearl City Cultural Center, the students of the Pacific Buddhist Academy will present the 3rd Annual Taiko & Karaoke Festival, The Path to Peace.

What started off three years ago as a showcase for students has evolved into a well-attended, highly regarded annual concert. Returning performers include Craig Shimizu, a voice instructor of thirty years, Colette Gomoto, KZOO Radio's 2006 Karaoke Taikai Champion, and veteran performer Amy Katsumoto, will be joined by newcomer Verda Masuda who took first place in the adult division of the 2008 KZOO's Karaoke Championships.

Young new singing sensation, Tevita, will make his debut at the festival singing the Obon standard Chanchiki Okesa and attendees will be treated to a Shishi Mai dance by Jon and Darlene Itomura and a dance by Dazzman Toguchi, who has been a member of Iwakuni Bon Dance Club for eighteen years.

As always, the highlight of the afternoon will be the exhilarating taiko performances by PBA students from Grades 9-12. This year, the senior performance ensemble will debut a collaborative composition, Buddha's Call for Peace, Toyofuku Sensei will introduce the freshmen "young bloods," as he refers to them, and the full PBA student body will perform a spirited version of the traditional Japanese fishing work song, Soran Bushi.

PBA freshmen are required to take a year of taiko and many choose to continue their studies for all four years at PBA. Through practice and performances, students develop concentration and self-discipline. They become more physically fit and learn to be persistent and internally motivated. In addition, Toyofuku Sensei says students consistently "develop a sense of worth, and confidence in themselves and one another."

The theme for this festival, The Path to Peace, refers to "the happiness and delight in life that come from an appreciation of each moment," said Toyofuku Sensei. It is a path that is both discovered and expressed by PBA students as they play the taiko.