ONTARIO, OR (USA) -- A unique Buddhist temple with roots in a dark chapter of World War II faces an uncertain future, along with this Snake River town's once-thriving Japanese American community. 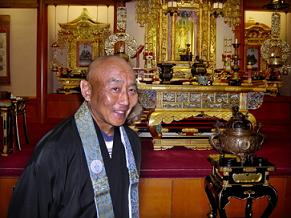 << Richard Cockle/The Oregonian
The Rev. Joshin Dennis Fujimoto leads a Buddhist congregation in Ontario that is seeing its membership dwindle. The congregation's temple, finished in 1957, has an ornate golden altar.

On some Sundays, only about 60 people attend services at the Idaho-Oregon Buddhist Temple. Most are in their 70s and 80s, and a half-dozen are 90 or older.

"The backbone of our people is dwindling," said the Rev. Joshin Dennis Fujimoto, 57, spiritual leader of the Shin Buddhist membership. "These are major concerns."

The single-story brick temple, with carved wooden doors and a golden altar, traces its origins to the suspicion that fell on Japanese Americans after the bombing of Pearl Harbor on Dec. 7, 1941.

With little more than what they could carry, they resettled in 10 internment camps, 18 isolation areas or a scattering of "free zones" -- including Ontario and nearby Weiser, Idaho.

Across the Snake River in Idaho, "No Japs Allowed" signs were common, and then-Gov. Chase Clark was outspokenly anti-Japanese.

But in Ontario, "this area welcomed them to work and develop businesses and build families," said City Councilman John Gaskill, interim director of the Four Rivers Cultural Center, a museum, art gallery and performing arts theater where exhibits include a traditional Japanese garden and plans for a tea room this fall.

The area's Japanese American population ballooned practically overnight from 157 at the start of the war to 1,500, according to figures from the War Relocation Authority.

Cathy Ysuda, executive director of the Treasure Valley Community College Foundation and a member of the Japanese American Citizen League's board, is among Ontario residents with relatives who were interned during the war. Her grandparents were compelled to walk away from a successful Portland produce stand.

Some "probably never really got over it," said Ysuda, 53. "The conditions were bad; bitterly cold in the winter and blistering hot in the summer."

Fujimoto, the temple leader, had three uncles and an aunt who were sent to camps. His U.S.-born father, meanwhile, spent the war years in Japan, where he'd gone to study for the Buddhist ministry. Authorities restricted his travel but didn't detain him, Fujimoto said. Fujimoto's parents met and married in Japan, and Fujimoto was born in Tokyo, celebrating his first birthday on a ship to America.

After the war, many second-generation Japanese Americans, or nisei, stayed in the Ontario area to farm. A temporary Buddhist temple was built west of town in 1946. Six years later, the existing temple site was dedicated by the Buddhist lord abbot of Kyoto, Japan, and construction was completed in 1957.

"We still have members today who tell me stories of sand and bricks being carried in wheelbarrows," said Fujimoto, who grew up near Sacramento and worked 20 years as a sculptor and artist before becoming a Buddhist minister in 2004. The temple's altar ranks beside one in Seattle as the Northwest's most ornate.

Fujimoto noted that Shin Buddhists don't proselytize. "We see other religions doing that. It seems so pushy." Plus, he said, some Japanese Americans forsake Buddhism as a statement that they are American. Some marry outside the faith. Still others "lose interest in the relevance of Buddhist practice in their lives."

On the bright side, about 10 percent of those who attend adult dharma services is Caucasian, Fujimoto said.

In addition, he said, Buddhism deals with difficulty and suffering. He thinks of people as waves in a sea that is the source of all life. Life, then, must be treated as something precious.

"Every single moment is so significant," he said. "Everything becomes of the highest concern."