GRASS VALLEY, Calif. (USA) -- For the second year, visiting Tibetan monks and members of the Tsi-Akim Maidu Tribe shared an evening of culture. 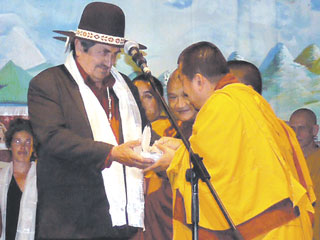 The monks are members of the Gaden Shartse Monastery, currently exiled to India to escape Chinese government repression in their homeland.

Six monks in red and saffron robes were joined on stage by Maidu drummers and singers. Performing separately, the monks chanted to the accompaniment of Tibetan drum and horn music.

White silk scarves were given to each tribal member on stage by the monks, promising long life and prosperity.

"We see a great similarity between what's happened to the Native people here in America the last 150 years and what's happened to the Tibetan people in the last 50 years," Joseph Guida, executive director of Saint Joseph's Cultural Center, where the gathering took place, told the packed house. "Killing wildlife in Tibet, destroying the environment, destroying the culture and committing genocide on the Native people are all familiar to Native Americans."

While in northern California's Grass Valley the monks created a sand mandala, working steadily and carefully for most of the week-long visit. The mandala was meticulously crafted by scooping colored sand into small hollow pencil-like cones and rubbing them together, carefully depositing the sand. Celestial beings are invited to inhabit the mandala to help purify negativities.

Guida, representing Sierra Friends of Tibet, told the gathering, "It is our dream that all Native people in this country receive federal recognition, not for any one reason, but for the truth. The Tsi-Akim Maidu is a tribal organization of indigenous Native Americans who inhabited the Sierra Foothills region of northern California for thousands of years. The California Gold Rush era and other events devastated the culture, language, heritage, religion and way of life of the tribe.

"The current members of the tribe, descendants of this once great nation, are dedicated to the preservation and perpetuation of its peoples' language, culture, history, heritage, religion and spirituality. The tribe is currently pursuing official federal recognition so their members and future generations can enjoy the rights and privileges to which they are entitled.

"Sierra Friends of Tibet officially recognizes the Tsi-Akim Maidu Tribe and further recognizes the contributions of their pre-history and their present cultural heritage."

Don Ryberg, Tsi-Akim Maidu chairman, said the recognition means a lot to the tribe. "When your community supports you, I don't think it gets any better than that."

Donations received at the event were divided between the monks to help feed, clothe and educate their members, and the Maidu of Nevada County to finance their work toward federal recognition.