Monks have reason to celebrate at Layton Buddhist Temple

LAYTON, UT (USA) -- The sweet sound of Thai music filled the air, much like the aroma of the cuisine being cooked nearby. This scene is not uncommon for celebrations at the Wat Dhammagunaram Buddhist Temple in Layton. 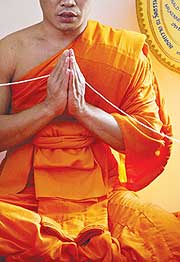 The monks at the Layton temple have good reason to celebrate.

Director Roberta Chase said they had been renting a house next to the temple for the last several years, using it as living quarters, for meditation and in many of the celebrations that take place at the temple. After years of renting the home, they have finally been able to buy it.

Initially the group contracted to purchase the building for a lower price, but through mediation agreed to pay $195,000.

Chase said it was a difficult road and, "We're very, very happy to have the house."

The sale became final earlier this summer, she said.

A housewarming ceremony and cultural fair were held Sept. 12 to celebrate the purchase of the home.

Dozens who attend the temple gathered to kneel and chant in unison with the monks, to offer food and show their respect, occasionally bowing to the monks to honor them.

While chanting, the monks were connected by one long string that each held in his hands. Chase said the string will be used to make bracelets that will be given to many of those who attend the temple.

The monks also blessed water and splashed it onto the audience to spread the blessings among those who attended.

Food offerings brought for the monks were placed into golden bowls.

The celebration included a food fair with authentic Thai food and entertainment from many different cultures, including a group of Cambodian dancers who, Chase said, are sewn into their completely authentic costumes.