Five-year battle over Oakland Buddhist temple comes to an end

OAKLAND, CA (USA) -- Buddhists are perceived as being above church politics.

But a bitter five-year battle over an Oakland temple pitted two Cambodian Buddhist organizations against each other and gave rise to restraining orders, threats and allegations of stealing. 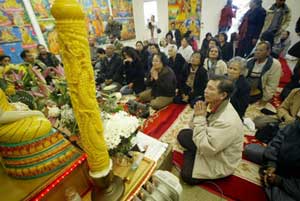 The struggle ended Monday afternoon in a nondescript chamber of the California Superior Court on Oak Street with a simple decision that boiled down to one thing: the Oakland Cambodian Buddhist Temple nonprofit has a right to its East 10th Street center and temple.

The center had been taken over in 2005 by the Massachusetts-based International Community of Khmer Buddhist Monks Center.

"We had to endure a lot of pain and suffering to achieve this," said Christina Sam, the daughter-in-law of the center's founder, Sam Son.

"I didn't expect it would take this long," said Christina Sam after she, her husband, Paul Sam, and scores of members gathered in front of an 8-foot gold-hued Buddha statue for the first time since the dispute started.

"We finally got our temple back," Suy added, as other members began removing signs of the Khmer Buddhist Center outside the center.

The feud began in late 2004, when members of the Oakland Cambodian Buddhist Society board of directors decided to transfer ownership of the temple to the
Advertisement
Quantcast
International Community of Khmer Buddhist monks. (The Khmer monks have no relationship to the genocidal Khmer Rouge regime that ruled Cambodia from 1975 to 1979.)

The board's decision set off intense opposition among members of the Oakland group, which called the board's decision illegal, and a legal battle ensued between the two groups over the modest, yellow and burgundy three-bedroom bungalow in East Oakland. Each side accused the other of wrongdoing and bully tactics.

Sunthay Sunly boiled down the issues to access and local control of one of the first community-owned Theraveda Buddhist temples in Oakland. "We are not fighting against a person, but for a place for the community to come together," he said. "They lost a lot already."

Son, a refugee who fled the Khmer Rouge, founded the Oakland Buddhist society in 1983. After he was evicted in 2005, Son and three monks moved across the street from the original location, at 5212 E. 10th St., and started the Oakland Cambodian Buddhist Temple. Many of their supporters followed and the battle continued.

Finally, on Tuesday, about 100 people gathered in front of the center, eager to visit the shrine for the first time in years. "Today is the day for us," said Theany Nov.

Not everyone agreed. "We had no choice," William Ley said. He was an original member of the Oakland society but continued on with numerous others from the original location after the Khmer Monks Center took over.

There are still details to be ironed out during the second phase of the trial about damages, after which the Khmer Monks Center would then decide whether to file an appeal, according to its lawyer, G. Robert Woodfin.

David Sternfeld, the Oakland Temple's lawyer, ruled out mediation as a possibility. In the meantime, the dozen or so International Community of Khmer Buddhist monks have to find a new home.