For Buddhists, San Francisco Offers Many Places to Worship

San Francisco, CA (USA) -- Situated on the West Coast of the United States, the city of San Francisco has long been home to many generations of Asians who immigrated to the United States.  In a lot of cases, they are Buddhists, but since they are from a variety of cultures and countries, the way they practice Buddhism also varies. 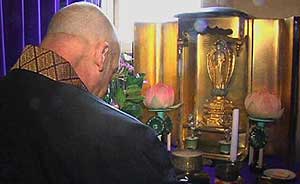 << Mathew has practiced Buddhism for 30 years

At an intersection in San Francisco, not far from the city's Japantown, two buildings provide an interesting contrast. One is a Catholic church designed in a Japanese style to attract Japanese-American worshippers.  Across the road sits a Western-style building that appears inside and out much like a church but is actually a Buddhist temple. Ron Kobata, the Japanese-American resident minister, wears a robe much like a Christian minister would, but he does not pray to God.  He prays to Buddha.

"The acculturation took place to adopt some of the customs of, perhaps you can say, the Judeo-Christian tradition," said Kobata.  "For example, the regular church services on Sundays, and introducing pews into the temple."

Kobata is a monk from the school of Shin Buddhism, which originated in Japan some 800 years ago. It arrived in San Francisco a little more than 100 years ago, in 1898, under the title Buddhist Churches of America, a name chosen so the monks could blend in more easily in a predominantly Christian country.

"The leadership at that time decided to adopt that term so as to become less alien," he added.  "So there was an effort to become more cultivated to this country."

During World War II many Japanese-Americans were rounded up into detention camps and nearly all San Francisco's Shin Buddhist temples were abandoned. Today, however, this school of Buddhism is rapidly expanding and has a presence in many parts of the United States.

From Japantown to Chinatown and the Tien Hau Temple, Chinese immigrants in San Francisco first established this Temple in 1852.  It was moved to its present location, also in Chinatown, in 1910.  It is dedicated to the Goddess of Heaven and Sea, Tien Hau, also referred to as Mazu.

"Mazu is the goddess of the sea. Since the Chinese came here on boats, they wanted to be blessed and protected by her.  So they invited her to San Francisco," said temple volunteer Susan Lau.

This is the oldest Buddhist temple in all of San Francisco. It has no monks or nuns: it only has Susan, who keeps up its day-to-day operations.

"We all love this very old, traditional temple," she added.  "I always feel comfortable here because I love the temple so much."

The temple has become one of San Francisco's tourist attractions.

One French Catholic family came with a purpose.

"We want to [have] good fortune," said the father. "That's why we came here."

They have come to visit the God of Fortune, whose statue sits in one corner of the temple. He seems to have a lot more incense sticks offered in front of him than the other gods. In Buddhism, incense sticks are burned as offerings to gods.

More recent Asian immigrants, such as those from Thailand, have brought their own versions of Buddhism.  A building near San Francisco's Golden Gate Park has been converted into a temple named Wat San Fran Dhammaram.  The temple was established in 2002, and today has more than 600 worshippers, most of whom are ethnic Thai.  Seven monks and five nuns live here.

"I enjoy it a lot. If I had known that the life of a monk is like this, I would want to be ordained a long time ago," said Phra Anandapanyo who has been a monk at the temple for less than a year.

For many Thai immigrants in San Francisco, their form of Buddhism, called Dhamma Buddhism, gives them a sense of home.  Everyone shares a common bond.  Other schools of Buddhism also give their followers a feeling of family. Matthew has been a Buddhist for 30 years.

"We have our problems in our board meetings," he said.  "And our financial concerns, but through that we find deeply spiritual unity here. We enjoy each other's company pretty much. It's like a family."

"In terms of interest in Buddhism in America, that's definitely growing," he said. "But I attributed that to the attraction the Dalai Lama has brought to Buddhism internationally."

"I think he has been like the superstar of all those schools of Buddhism in the United States," said Matthew.  "He really helped to define the concepts that were hard to describe like Nirvana and Karma. These words are becoming part of the American lexicon."

"And so to define yourself as a Buddhist is one thing but to refine yourself as a human being is something else," he added.  "Any religion can help you do that.  I think all different schools of Buddhism have slightly different techniques to accomplish that worldview."

Buddhists in San Francisco consider themselves very fortunate.  They live in one of the most beautiful cities in America and have an abundance of choices to satisfy their spiritual needs.