While not reincarnation, animals at least get to live the lives they have

Las Vegas, Nevada (USA) -- On a dusty corner in North Las Vegas, there is a Buddhist temple. On that temple's property, there are cats. Many, many cats. Dozens of cats, in fact, have been known to congregate there. 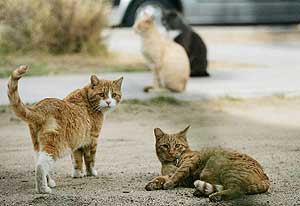 These are feral cats, meaning they live wherever they darn well please. Apparently, the Buddhist property in the sparsely populated residential neighborhood at Gowan Road and Simmons Street suits them.

The Buddhists, being people to whom all life is sacred, care for the cats. They feed them, give them water, offer a gentle rub behind the ear when it seems a good idea.

After all, the Buddhists believe in reincarnation, which means they never know who that cat might once have been or might some day become.

All of which has caught the attention of the police. It is illegal in North Las Vegas to let pets run astray. It also is illegal to own more than three cats. Because the Buddhists care for the cats, which live on the temple grounds, the Buddhists could be in trouble.

"Forty cats is pretty much outside the accepted number," said Sgt. Tim Bedwell, a police spokesman.

On Friday, the animal control department visited the temple, prompted by a complaint.

The Buddhists were told to get rid of all but three of the cats, possibly by having them adopted. Traps were left, and instructions on how to use them were relayed. They were given until today to take care of the problem.

Bedwell said the group seemed ready to comply and had adopted out all but 12 of the cats by Tuesday. He said animal control will visit the property again today and will help the Buddhists figure out a solution, possibly including a variance to the city's ordinance.

He said the group will not be cited, nor will animal control round up the cats and take them to a shelter, where they probably would be killed.

Wijitbunyasarn Ruangrit , the temple's abbot, said through a translator that the cats started coming around four or five years ago. First, it was one cat, then two, then three.

By November, the nonprofit Community Cat Coalition of Clark County had rounded up 57 cats on the property.

That's what the group members do. They round up large populations of feral cats, neuter them and release them back into the wild. They favor animal preservation, not destruction.

Michael White, the cat advocacy group's president, said neutering the cats takes care of the problem. With the population not able to breed, it will naturally shrink over time.

White and several supporters were at the temple on Tuesday to raise awareness of the feral cat issue. They want North Las Vegas to adopt an ordinance similar to one in unincorporated Clark County that allows large feral cat populations to be neutered and released.