Jail's meditation course is not a hard cell

Participants in the popular weekly course at L.A. County's Men's Central facility say the techniques they learn for relaxation and self-control couldn't be more useful in their environs.

The men in the sanctuary obediently followed their Buddhist chaplain's command, bowing their cleanly shaven heads and beginning their meditation exercises. A bell chime hung in the air before melting into silence. 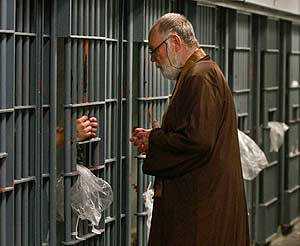 Most of the men were new to the relaxation technique, seeking to add a little Zen to their lives. But the venue for this course was not a posh studio in Silver Lake or Santa Monica.

These men were trying to get in touch with their chi at Men's Central Jail.

The downtown L.A. correctional facility, which civil rights advocates have labeled medieval enough to drive men mad, might not be the most intuitive choice for a meditation center in the city. But inmates who frequent the popular weekly course, now in its third year, say the techniques for relaxation and self-control couldn't be more useful in their environs.

Bernard Young, 58, has been locked up at Men's Central since being charged with assaulting his wife with a deadly weapon almost a year ago. The Houston native, his beard white and frizzy, said he could attribute most of his transgressions to allowing anger to overtake him. A friend in jail suggested he start taking the meditation courses a few months ago.

"When I start thinking bad things, I just start meditating," he said, pausing to smooth his standard-issue blue jumpsuit. "I need all the help I can get."

The popularity of the classes highlights the stresses of living behind the jail's painted green bars. Inmates self-segregate among their own racial and ethnic groups, and fights often flare between them. Outside the sanctuary at a recent Friday meditation session, guards patted down one inmate to find a shank the man had styled from scrap metal, wrapped in linen and stuffed in his underpants.

Last year, the American Civil Liberties Union released a report that blasted the jail. The facility is overcrowded, the ACLU said, and its dark, windowless cells give inmates little opportunity for rehabilitation.

"They learn how to deal with conflict a little better," said L.A. County Sheriff's Capt. Daniel Cruz. "They look within themselves. They're not so easily excited or angered."

Joshua Silva, 25, has been incarcerated since he was charged with robbery in October. The Whittier native, his lip studded and his arms and neck covered in tattoos, is to be released soon. He said he hopes the techniques he's learned during the meditation courses will help make the transition easier.

While he has been incarcerated, the classes have offered him an opportunity to escape the jail's constant clamor: inmates shouting, jail doors clanking shut, instructions barked through the intercom.

On a recent Friday, about three dozen inmates filed in, quickly taking seats in wooden pews in the drafty sanctuary. African Americans sat to the left, Latinos to the right, just behind two Asian Americans sitting by themselves in the front pew. Many boasted gang affiliations with tattoos on their necks and shaved heads.

A chaplain, donning a flowing brown robe and a gold sash, drew their attention from the front of the third-floor sanctuary.

"You're probably thinking, 'What am I doing here, what's happening with my family, am I going to get big time at my sentencing?' " he said. "All of these things are gnawing away at you."

As the chaplain instructed the inmates on how to breathe, focus and empty their minds, attendees interrupted with eager questions.

"What do you mean 'let go?' Let go of what?" asked one older inmate, wiry with a graying mustache.

When it came time to meditate, the room fell silent. The inmates clasped their hands, one thumb over the other, eyes downward, chins tucked in, feet planted against the sanctuary's lacquered stone floor.

But even the most committed students would occasionally open their eyes to survey their surroundings, a habit guards say is hard to break in jail.

The classes are run by volunteers, which allows the Sheriff's Department to offer them without added expense. The idea was floated a few years ago by members of a local Zen center. There was some consternation initially, organizers said, among chaplains of other denominations.

"Don't you know, if you empty your mind, the devil will rush in," Buddhist chaplain Gary Janka recalled hearing at the time, a concern that was addressed by inviting an instructor who specialized in Christian meditation to join.

The courses, Janka said, have shown promise. He points to one inmate he met while walking a row of cells. The man asked for a book on yoga, and the request blossomed into a deeper mentorship.

The inmate had long struggled with anger and had been sent to "the hole," or solitary confinement, at least once for blowing up at a deputy. Janka counseled him to control his anger in situations in which he felt provoked. On one occasion he instructed the man to fill three notebook pages with the mantra "don't bite the hook."

Weeks later, his cell was searched for contraband, a process that had set him off in the past.

"Normally he would've gone ballistic," Janka said. "But the first thing he said popped up in his mind was 'don't bite the hook.' "

As for the irony of teaching meditation in jail, the Buddhist chaplain doesn't see it.

"What a perfect place," he said. "That's what we have going for us here, that everybody is suffering."