by Frances Dinkelspiel, Berkeley Side, November 29, 2010

Berkeley, CA (USA) -- Harold Way, a small street in the heart of downtown Berkeley, has become a new center for Tibetan Buddhism. In the last two years, followers of Tarthang Tulku, a Tibetan lama who came to Berkeley in 1969, have purchased three buildings next door to one another — a whole city block. 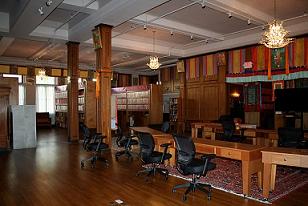 << The library inside the Mangalam Research Center

Visitors walking along the west side of Harold Way can now immerse themselves in Buddhist teachings. They can browse in a bookstore filled with books written in English and Tibetan, learn Sanskrit, or volunteer to help send books to Tibetan refugees. They soon will be able to hear lectures on Buddhism and other topics.

The visibility of the complex, with its bright red, yellow, and blue exteriors, is a departure for Tarthang Tulku’s tight-knit collection of followers. While for decades the group has played a major role in transmitting and preserving Tibetan culture, raising millions of dollars in the process, it generally tries not to draw attention to itself.

“We keep a low profile,” said Jack Petranker, the director of the Mangalam Research Center for Buddhist Languages, which operates out of the old Elks Club building at the intersection of Allston Way and Harold Way. “It is the Buddhist thing to not toot your own horn.”

The success and visibility of Tulku’s Buddhist church is a reflection of the entrepreneurship many Tibetan lamas have had to adopt in the United States, according to Robert Sharf, the chair of the Center for Buddhist Studies at UC Berkeley. While other spiritual leaders like rabbis or priests have the backing of well-established religious organizations, the lamas who came to the US after the fall of Tibet in 1950 did not have any institutional support. So many of them, including Tulku, had to figure out ways to both create a following and raise money.

“If you are a Buddhist teacher you have to be entrepreneurial because no organized infrastructure is there to help provide capital,” said Sharf.

The creation of a complex of buildings on Harold Way started with the purchase of 2018 Allston Way. The Mangalam Research Center for Buddhist Languages opened its doors in the fall of 2009, followed a year later by the opening of a building next door at 2210 Harold Way. (Former home of the Berkeley Psychic Institute) The Tibetan Aid Project, Dharma Publishing Bookstore and some foundations operate out of that structure. The group bought 2222 Harold Way from the Judah L. Magnes Museum in 2009 and will open Dharma College in 2011.

“One of the things we are announcing is we’re here to stay,” said Petranker. “We’re rooted in the West, in California, and particularly in Berkeley. We want to be part of the vibrancy of the community, both as a religious tradition and a wisdom tradition.”

The group, which refers to itself as the Nyingma community, also owns a building on Highland Place called the Nyingma Institute, which offers workshops on Tibetan Buddhism and living spaces for work/study students. Petranker and others live in another of the community’s buildings, a converted fraternity on Hillside Avenue. The group used to operate Dharma Publishing out of a warehouse on San Pablo Avenue, but moved its operations to Sonoma County, where the group has two large retreat centers.

This vibrancy in exile must have seemed far fetched when Tarthang Tulku, now 76, fled Tibet in 1959. The Chinese invasion in 1950 decimated much of Tibet’s culture and many of its religious institutions. More than 6,000 monasteries were destroyed and 100,000 Tibetans fled to India, Nepal, and Bhutan. Many of the refugees left behind their personal effects and chose instead to carry out the sacred texts of Tibetan Buddhism.

Tarthang Tulku, one of the last remaining lamas to have received a complete Buddhist education before 1959, went to India, where he taught at Sanskrit University from 1962 to 1968. While there, he met someone who told him about Berkeley, according to Judy Rasmussen, the director of the Nyingma Trust. Tulku’s teachers then told him to go to the West and spread teachings about Buddhism.

“In those early years, California was very open to new ideas,” said Rasmussen.

Tulku came to the US with the dual goal of transmitting Tibetan Buddhist practices and beliefs as well as preserving Tibetan culture.

“Let the challenges you find in the workplace be a guide to deepen your spiritual practice,” said Petranker.

Tulku spread his teachings in a series called Time, Space, and Knowledge. He has now published 18 books on Tibetan Buddhism.

In addition, Tulku focused on preserving Tibetan culture by creating a “mandala of organizations.” These various groups — there are at least twelve — develop and fund Tibetan Buddhist teachings, spiritual retreats, monasteries, films, and books,  and support work study students and those who spend decades studying with Tulku.

One of the community’s most high-profile endeavors takes place each year in Bodhgaya, India, where the Buddha attained enlightenment. Known as the  World Peace Day Ceremony, it was started by Tulku in 1989 and now attracts  25,000 Tibetan exiles, monks, nuns, and lay people annually. The Tibetan Aid Project, one of Tulku’s organizations, distributes thousands of Tibet texts, prayer wheels,  flags, and art objects there each year.

“It’s made a big difference in helping the Tibetans keep their language and culture alive,” said Petranker.

There is a core group of 150 to 200 followers in the Bay Area, according to Petranker. Another thousand or so come to lectures, classes, and spiritual retreats.

Tarthang Tulku no longer teaches publicly but spends his time in contemplation at Odiyan, a center in Sonoma County. It is common for senior Buddhist monks to go on retreat, but Tulku’s reclusiveness  is unusual since he is running all these organizations, according to UC’s Sharf. Tibetan Buddhism is traditionally centered around a charismatic holy man to whom people flock. Other lamas in the United States spend a lot of time traveling and lecturing to spread their message and raise funds, but not Tulku, said Sharf.

“Buddhism is poised to become a major influence in Western culture and world culture in a way it hasn’t been because the East and the West have been separate,” said Petranker. “People in this culture understand there is a need for deeper understanding and there are all sorts of things not going in the right direction.”

Tarthang Tulku’s group now owns seven properties and operates at least 12 different non-profit organizations with assets worth millions of dollars. Yet virtually all the people who work with the group are volunteers who take no pay. Funds are raised through annual events, programs, and donations. One of their most visible events, Taste & Tribute, benefits The Tibetan Aid Project. Held annually in San Francisco and New York, it is a gala where dozens of top chefs create a four-course meal for guests.

http://www.nyingmainstitute.com/page/about-nyingma-institute
The Nyingma Institute – Founded in 1972, the institute is Tulku’s largest and most visible project. More than 150,00 students have attended lectures, classes, and retreats on Buddhist studies, meditation, yoga, Nyingma psychology, and other classes, according to the foundation’s website. The institute occupies a building on Highland Place in Berkeley  and helps direct centers in Brazil, Germany, and Holland. The Nyingma Institute has about $7 million in assets, according to records filed with the IRS in 2008.

http://www.tibetanaidproject.org/
Tibetan Aid Project – This was started in 1969 and initially focused on providing food, clothing and shelter to the 100,000 Tibetans who fled to India, Nepal, and Bhutan. In recent decades, this project has focused on preserving and distributing sacred Tibetan texts, prayer flags and religious objects. The project has given away about 2.5 million books of ancient Tibetan wisdom during the last 20 years of the World Peace Ceremony. While these texts were once so rare they were only found in monasteries, the efforts of Tulku’s Nyingma community have made them widely accessible to not only monks, but Tibetan women, children and nuns. The Tibetan Aid Project raises about $500,000 a year, according to IRS documents, and spends the majority on its funds on publishing and shipping books.

http://www.dharmapublishing.com/
Dharma Publishing Company – Tarthang Tulku started the publishing company while he was living in India and moved its operations to the US in 1971. Its goal is to preserve Tibetan culture by keeping important books in print. In 1981, Dharma printed the complete Tibetan Buddhist canon, which is composed of 120 atlas-sized volumes. Dharma donated and sold many complete collections to libraries around the world, ensuring that this canon will survive.  Each year, Dharma publishes thousands of Tibetan texts, which are traditionally unbound and wrapped in cloth, and distributes them to exiles. Dharma also publishes books by Tulku, including his seminal series, Time, Space, and Knowledge. Its bookstore is at 2210 Harold Way.

http://www.nyingmavolunteer.org/mangLoc.html
Mangalam Research Center for Buddhist Languages – Founded in 2008, the center brings scholars to Berkeley to study Buddhism, its written tradition, and its sacred texts. It also offers classes. The heart of the center is a magnificent library that holds one of the world’s greatest collections of Tibetan texts.

Dharma College – This new program will begin in 2011 and will have an eclectic mix of programming at the start, according to Robin Caton, who is co-director of the college with her husband Curtis.  There will be noontime and evening lectures for people in the community as well as college and graduate-level classes for students of Tibetan Buddhism. The group purchased this building in 2009 for $6 million, according to public documents.

http://nyingmatrust.org/
Nyingma Buddhist Religious Trust –This organization raises funds to restore monasteries in Tibet. The trust has about $2.5 million in assets, according to IRS documents.

http://nyingmatrust.org/
Nyingma Trust – The foundation raises funds to support the members of the Nyingma Order, a group of people who have studied and worked closely with Tarthang Tulku for 15 to 40 years. “The members of the order have made religious commitments to dedicate their lives to the Dharma and the welfare of all beings, uphold the teachings of the Nyingma lineage and to follow the Bodhisattva Vow and Buddha’s Eightfold Noble Path, and to support each other as community,” according to the trust’s website.

Bodhgaya Religious Trust – This organization supports World Peace Ceremony in Bodhgaya, India, a 20-year old annual gathering of Tibetan Buddhists. In 2009, more than 10,000 monastic monks and 15,000 lay people gathered near the sacred Bodhi tree to recite prayers for more than eight hours a day over a 10-day period. This trust has about $4 million in assets, according to IRS records.

Yeshe De Text Program, also known as the Tibetan Book Project, is dedicated to preserving Tibetan culture through the preservation and distribution of Tibetan texts.
http://www.yeshede.org/

Guna Foundation – Founded in 2009 to preserve archival pictures and footage of Tarthang Tulku and his various organizations, the foundation is currently making a documentary film on Tulku. It also funds Yak Liberation, a group that releases yaks back into the wild.
http://gunafoundation.org/home

Light of Buddhadharma Foundation — This group raises funds to preserve and restore shrines and cultural artifacts in India, pay for religious ceremonies at holy places in India, and buy robes for monks.

Update 11/29/10: Berkeleyside confused the Nyingma Buddhist Religious Trust with the Nyingma Trust and has since updated this article to clarify the two. Also, the Tibetan Buddhist canon is 120 books, not 75. The article has been fixed to reflect this. Also, the Nyingma Institute works closely with centers overseas, but does not operate them.