Mood of meditation at Buddhist Temple

Stittsville, Ontario (Canada) -- Except for the intermittent sounds of traffic passing by on Hazeldean Road filtering into the building and the ticking of a wall clock, silence reigned in Stittsville's Cambodian Buddhist Temple on Thursday evening, May 17 as Bhante Kovida led attendees through meditation exercises. 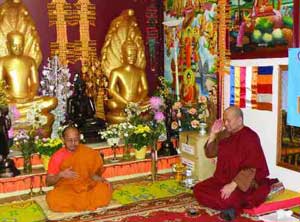 << Ven. Rath Sam, left, of the Cambodian Buddhist Temple on Hazeldean Road in Stittsville and Bhante Kovida, right, take part in a meditation session led by Bhante Kovida at the Temple on Thursday evening, May 17.
John Curry, Metroland

One involved moving the hands in a rotational cycle, while touching the body at certain points. These movements and touches enhance a person's awareness of the moment and helps eliminating random thoughts from the mind. In this way, these hand and arm movements are a roadway to a state of meditation.

This exercise was followed by a half hour of controlled breathing, again with an air of silence pervading the Temple. Bhante Kovida urged those present to be aware of the rising and falling of the chest area as they breathed in and then breathed out. He advised that concentrating on breathing helps focus the mind.

He said that patience is important in controlling thoughts. "Being patient with a wandering mind" is how Bhante Kovida put it as he sat cross-legged on a cushion on the floor, leading by example.

At 7:55 p.m., almost an hour after the meditation exercises had begun, they were over - the silence was ended as Bhante Kovida then offered some explanations and responded to a number of questions directed his way.

He explained that an untrained mind is susceptible to ignorance and delusion which in turn give birth to self-centred cravings, as well as hatred and ill-will including jealousy and resentment.

However, he continued, a calm mind will give insight.

"The aim of this practice (meditation) is to purify the mind of these defilements or these mental pollutions," Bhante Kovida said, adding that these so-called mental pollutions cause suffering.

The untrained mind is reactive, he said.

"The mind is always going between liking and not liking and wanting and not wanting or aversion," he said, noting that Buddhism believes that if the mind is trained, then the mind will not be so reactive and will remain more peaceful.

Bhante Kovida advocates overcoming any conditioning that directs people to reacting to conditions. Instead, he wants people not to react but simply to rationally observe.

He said that the meditation practices which he advocates are meant to focus the mind. He said that for some people, activities such as running or swimming do this. He says that he is supportive of anything that helps a person bring his or her mind to the present moment, embracing calmness and peace.

He urged those present to be calm and patient when they come upon obstacles in life and not give in to anger or frustration or anxiety. He also advised not to become too attached to the things of the world because eventually everyone has to leave the world in death.

Bhante Kovida, who has been leading meditation sessions at the Cambodian Buddhist Temple on Hazeldean Road in Stittsville, is a skilled teacher of meditation and spirituality meant to help people balance their lives.

He grew up in Jamaica and immigrated to Canada where he obtained a science degree. He then travelled overland from Europe to India and Nepal where he began the study of Indian history and culture, Hatha Yoga and meditation, classical Indian music and Buddhism.

Bhante Kovida has travelled extensively in Southeast Asia including Australia and New Zealand, teaching meditation and some Qi Gong exercises.

He has written two books: "An Inquiring Mind" in 2003 and "The World Is Myself" in 2008. These books are available through www.bhantekovida.com

Bhante Kovida emphasizes that the most important goal of spiritual practice is the understanding of ourselves on a deeper level including understanding the nature of the human condition, why there are problems, why there is suffering and how to overcome suffering.

His meditation program is geared to teach essential skills and practices necessary to restore the body and the mind. The impact of stress in daily living can be reduced through mediation.

Bhante Kovida's program includes guided meditation and exercises to promote practical wisdom, mind and body awareness exercises, breathing techniques used to reduce mental and physical tensions and guided relaxation. He believes that these meditation techniques have the capacity, when practiced on a regular basis, to develop an ability to reduce anxiety and tensions.