Sharing crop a way of saying thank you 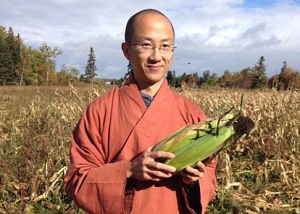 << Venerable Dan says sharing their corn crop is a way to say thank you. (CBC/Jessica Doria-Brown)

Venerable Dan, one of the Buddhist Monks, says the corn was handed out as a way to say thank you to Islanders. "We're opening up the field for all Islanders, our neighbours and friends to come and pick the corn," said Venerable Dan.

The monk says the reason for sharing is simple.

"When we first got to this Island we got lots of help and our master always told us whatever we do, we have to keep this in mind that one day do whatever we could to repay the kindness to Islanders."

Venerable Dan says when they realized they had a good harvest of corn, it was suggested this would be a good way to repay that kindness.

The monks don't believe in killing any living being, which is why the corn was grown without the use of pesticides.

Many P.E.I. families told CBC they appreciate the monks opening up their corn crop to the public.

"I think it's great," said Trista Doary who visited the field with her two children. "The kids loved to pick it off."

Doary says she will be sharing the corn they picked with family and friends.

Even local food banks took advantage of the offer, and picked some of the crop to help feed those in need.

Jeanne Maki says she was one of the volunteers who helped the Food Exhange pick corn two weeks ago for the local food banks. She returned Sunday to not only pick some for herself but to help the food bank again.

"It's very generous and it's nice for the food banks," said Maki. "I hope everyone can enjoy the corn and thank the monks for growing it."

The corn crop is located at 2837 Heatherdale Rd. in Montague.

The corn field is open until 5 p.m. - or while supplies last.

If there is any corn left, the monks will donate it to the Salvation Army, food banks and other agencies.