For the first time, there will be a Theravada Buddhist monk based in Halifax

Halifax, Nova Scotia (Canada) -- It's not a sound that often reverberates from a small steepled building - the chorus of monks chanting. 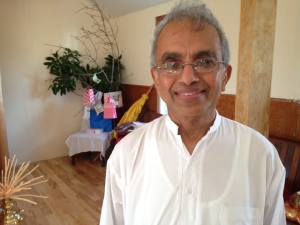 << Ramya Samarasekera, the secretary of the Atlantic Theravada Buddhist Cultural and Meditation Society, says a group of 30 people volunteered their time and money to prepare the temple. (Elizabeth McMillan/CBC)

In Herring Cove, N.S., members of the Buddhist community who practice the Theravada tradition have transformed a former Baptist church into a temple.

"We hope the peace and love and kindness that Buddha generated will be spread among many people," said Ramya Samarasekera, the society's secretary.

The group was established earlier this year. Since buying the building a month ago, volunteers renovated the floors, installed a fresh roof and removed mould that had crept in during the years it was empty.

Now a white Buddha imported from Sri Lanka is the centrepiece.

Samarasekera says the transformation would never have happened without dozens of people's time, energy and money — Theravada Buddhists as well as Muslims and Christians.

"We have been working day and night for the last one and half months to renovated this place up until this day. We hope it will benefit everyone in the region," Samarasekera said.

Up until now, the group which includes people from Sri Lanka, Burma and Thailand, didn't have a place to practice in the Maritimes.

The society sometimes used the Shambhala Centre or Chinese temples for gatherings.

But Samarasekera said not having a temple prompted some people to move to other parts of Canada that do. Now he hopes those families consider moving back and that it'll be an anchor for newcomers.

"We hope we can retain those immigrants who have this tradition back here in Nova Scotia and the Atlantic region," he said.

The group hopes to open up the temple for meditation classes, a monthly soup kitchen and services.

It is also the first time the group will have a chief monk based in Halifax. Bhanthe Sirinanda, who is doing his masters at Saint Mary's, will lead workshops and services.

Ahangama Rathanasiri, a chief monk who travelled from Toronto for the ceremony, hopes the building will become a centre for the community.