L.A. museum to Vancouverites: Come on down for Buddhist Art exhibit

Exhibit on Buddhist Art on China’s Silk Road runs May 7 through Sept. 4 at Getty Center

Vancouver, Canada -- Tim Whalen wants Vancouverites to surf down the California coast this summer to see the exhibit Temples of Dunhuang: Buddhist Art on China’s Silk Road at the Getty Center (getty.edu). 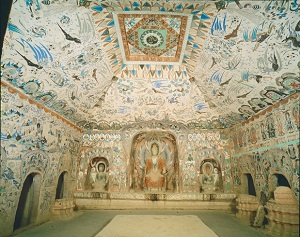 At a special presentation at the Fairmont Pacific Rim Hotel in downtown Vancouver, the director of the Los Angeles-based centre’s Conservation Institute pitched local cultural tourism to the sunny metropolis.

“We’re just two-and-a-half hours down the coast (by air) and we welcome you all to come take in the first showcase in North America to celebrate more than 1,000 years of Buddhist art from this UNESCO-listed World Heritage Site at the Mogao Grottoes,” said Whalen.

“This exhibition could not have been accomplished without the vision and leadership of the Robert H. N. Ho Family Foundation and other partners.”

In recent years, the Getty Museum has experienced such an increase in Chinese tourism that it now has Mandarin-speaking staff at all levels. Vancouver’s unique placement as the “Gateway to the East” is seen as complementary to that audience.

SFU professor emeritus Jan Walls notes that there is a significant local population with interest in the important and crucial Buddhist art and scripture discovered in the 500-plus temples.

Carved into nearly two kilometres of cliff face in the Mogao grottoes near the essential Gobi Desert Silk Road trading post of Dunhuang in China’s Gansu province, the caves themselves are a popular tourist destination — but certainly not as conveniently located as Los Angeles.

“You have a such a potentially appreciative Chinese community here for the exhibit, but also Buddhists from Japan, Korea and from elsewhere in Asia in the Lower Mainland,” said Walls.

“The involvement of the Robert H. N. Ho Family Foundation which is here and that it is the Year of the Monkey — the Monkey King being the epic character in the classic story Journey to the West about travelling to India to get the Buddhist Sutras — all makes it appealing.”

An Order of British Columbia (OBC) appointee, founder Robert H. N. Ho has funded medical research at VGH, multiple endowments for Buddhism studies at UBC and other major universities, and initiated the establishment of the buddhistdoor.com website.

The foundation recently sponsored the popular exhibit Forbidden City: Inside the Court of China’s Emperor at the Royal Ontario Museum and the Vancouver Art Gallery.

Asked why the Getty is hosting the Cave Temples of Dunhuang exhibit rather than a local institution, Ho had this answer: “We do not currently have a museum dedicated to Chinese art and culture that can accommodate this and other internationally significant shows here in our town.

“We are working on it and have formed an organization called China Global: The Vancouver Society for the Promotion of Chinese Art and Culture, and the precise goal of our society is to see if we can have a world-class Chinese museum here in Vancouver. It is hard work and we are doing our best to see exhibitions of this level hosted here.”

Cave Temples of Dunhuang: Buddhist Art on China’s Silk Road runs at the Getty from May 7 to Sept. 4.