NEW BRUNSWICK, Canada -- A Jewish student is outraged by the way Rutgers University handled an investigation into a swastika found taped to the ceiling near her apartment dorm room. 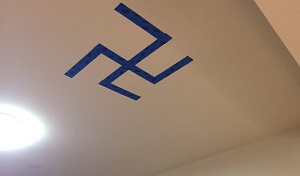 On Jan. 15, Rutgers senior Sara Rosen returned to her room at the Livingston Apartments after finishing a workout at the Livingston Campus gym. She walked in and saw a "huge swastika" taped to the ceiling right outside her bedroom.

According to a police report, later that evening officers responded to the apartment and spoke with the student responsible for taping the swastika to the ceiling. The student claimed it wasn't meant to represent the Nazi's swastika (or the Nazi Hakenkreuz), which faces right, but rather the Buddhist "sauwastika" — which faces left and is associated with peace. Police also spoke to the student's roommate.

The officer told the two students, who were Rosen's roommates, that "in the interest of peacekeeping, that I strongly advise them to take it down, but that I cannot force them to do so and infringe upon their freedom of speech."

Rosen said neither of the students claimed to be Buddhist, and that the symbol was intended for her. She said there had been a conflict between her and the two students some weeks earlier, in which they brought a pine tree into the apartment despite Rosen's request to remove it because of her allergies.

"This is all done as an act of intimidation toward me," she said.

She said Rutgers dean of students Mark Schuster implied that "she was exaggerating," saying the incident was "a joke gone bad."

Rosen also noted that, to her knowledge, neither of the two students removed the swastika. And when she returned to the apartment more than a day later with her mother, she says it was still there. She is unsure who eventually removed it from the ceiling.

Schuster confirmed that the university had investigated the matter, but declined to comment further. He deferred all other questions to be handled by someone from the media relations department.

A statement from Rutgers spokesman Jeff Tolvin read: "Rutgers University — New Brunswick takes reports of potential bias crimes extremely seriously ... Following an extensive investigation, which included several interviews ... the Prosecutor's Office determined there was not probable cause to charge the suspect with a bias crime. Residence Life offers alternative housing in cases where students have immediate safety concerns. However, the student may decline that offer and keep their residence."

Rutgers University has been blighted by a string of robberies in a single week.

The student who taped the symbol to the ceiling was reached for comment and pointed NJ Advance Media to a statement on Facebook from his friend who spoke on the his behalf.

"This is a person who has never once shown any hostility of any sort toward anybody, even when faced with situations that would have driven any other person (myself included) to anger," the statement said.

The friend, who said he too was a Buddhist, added, "For us to see this only as a symbol of hatred and the Nazi party is to completely erase the long history of swastika and Buddhism."

The friend added that the student "has not only been relocated from his Livingston apartment, but has also been ordered to leave on-campus housing altogether and had "talk among the authorities that they are considering suspension. All these sanctions, I will reiterate, are due to his taping a Buddhist swastika on his ceiling."

Joshua Cohen, regional director of the Anti-Defamation League, New Jersey Region, condemned the incident and the way Rutgers responded to it.

"The university should ... take the important step in making a strong public statement in condemning this incident," he said.

To the student's claim of being a Buddhist, Cohen said, "Yes, there is a long history of the swastika ... (but) the murderous legacy of the Nazi regime has converted the swastika into a symbol of hate, anti-Semitism and infamy."

Whether facing right, or facing left, he said the symbol is "shocking, jarring, it is frightening" and that, "no student should have to come home and view something like that."

He added, "he should know a symbol like that offends the sensibilities of Jewish and non-Jewish individuals. You would think that individual would have the good sense to remove it."

Rosen said after the incident she had little choice but to move out of the Livingston Apartments for her safety.

Rosen said she is hoping for a policy change that would prohibit this type of behavior by students.