Toronto, Canada -- On a gravel pathway in Kawartha Lakes, six Chinese lion statues seem to be guarding a metal fence with a rusty speaker taped to a pole, blaring out traditional Buddhist chanting into the strong winds. 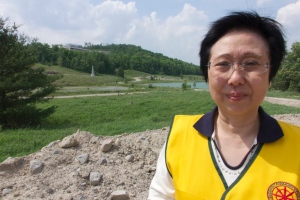 << The temple's development manager, Diane Chen, said those who have worked on the project are disappointed by the proposed wind farm. (Valerie Ouellet/Radio-Canada)

A massive Buddha head rests on the tall grass among dozens of wooden crates, looking almost amused at the workers sweating in the sun, trying to move heavy pillars.
Chen

The windswept field is supposed to become the site for one of the world's premier destinations for Buddhist pilgrims, and attract thousands of tourists each year to the community about 140 kilometres northeast of Toronto.

But a project to build 15 wind turbines nearby is now threatening that vision, according to the Buddhist group that's building the complex.

For 20 years, the Buddhists have been buying land in the Kawartha Lakes area and collecting donations with one goal: recreating the world-famous pilgrimage site of the Four Sacred Buddhist Mountains of China for North American pilgrims, the site's development manager, Diane Chen says

"It's hard money-wise and time-wise and physically challenging to pay pilgrimage to [the] four sites," she told Radio-Canada. "We would like to offer a similar experience here in Canada."

Once completed, the $80-million project would include replicas of the four Chinese sites. They would cover almost 700 hectares, with traditional temples and a 40-kilometre path for walking meditation.

The group estimates its site could attract up to 45,000 pilgrims a year who would meditate, sometimes for days, while travelling from one temple to the next.

With every piece of sculpture and pillar being shipped by boat from China, then put back together in Canada, construction will likely take decades.

A project in jeopardy?

But the Buddhists aren't the only ones interested in the region.

The strong winds that whistle across the site have also attracted several wind farm companies, and so far three projects are in the works to build 15 turbines just a few kilometres from the future temples.

The Buddhists are furious. They say the turbines would be ''smack bang in the middle'' of their temples and point out part of the land sits on the Oak Ridges Moraine, a protected area.

"We're a major development, not a Mickey Mouse project. And it is disappointing for us that our projects, the four sacred sites, would be in jeopardy," Chen said.

She said people who visit a pilgrimage site expect a peaceful environment.

The sight of the turbines and noise they make will disrupt pilgrims' meditation, she explained, especially when they are walking from one site to another.

Already, she said, donations have dwindled because of the turbines.

Chen and the monks aren't the only ones worried about the 15 wind turbines.

Dozens of farmers and residents who live near the temple site have put up posters to protest against the wind farms.

Kawartha Lakes Mayor Andy Letham said if the temple project is cancelled, the community could lose millions of dollars in economic spinoffs and hundreds of potential jobs. He said 15 turbines, or even 20, aren't worth it if they jeopardize what the Buddhists want to build.

"Somebody's not looking at the big picture. This is huge for the province, for the whole region, for the city," Letham said.

He says he supports the Green Energy Act — the provincial legislation aimed at creating more renewable energy in Ontario — but he says this time, the province hasn't consulted the community enough before approving the wind turbines.

WPD Canada and Capstone, the companies behind the wind power projects, say there is nothing to worry about, because the turbines are far enough from the temples and noise levels are well below the regulated maximum.

"There will be no sound generated at the site, and, because of the topography of the area, the hills and the trees, the visual impact is going to be reduced,'' said Kevin Surette, a spokesperson for WPD Canada

Local resident Ralph McKim agrees, adding concerns about the noise are exaggerated and the community is experiencing a ''clash of anxiety'' like never before.

McKim, 85, has agreed to lease his land to WPD Canada to install a wind turbine.

"If we are serious about climate change, we need to put these turbines somewhere,'' McKim said.

Community members and the Cham Shen Temple have appealed the projects in front of the Environment and Land Tribunal of Ontario.

The courts have ruled in favour of the companies in two of the three cases, and so 10 turbines could be installed by the end of the summer.

For now, temple construction is suspended on three of the four sites, but Chen said too much money and time have been invested already for the first site, and construction must continue.

"We have voiced our concern and we have to leave it in the hands of the Buddha," Chen said.
TOP