Temple is a cultural heartland

Toronto, Canada -- Chinese New Year is celebrated from one end of Toronto to the other. But the heart of the New Year may lie in a temple hidden away in suburban Thornhill. 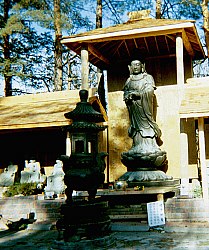 Every year, as many as 10,000 Buddhists, mostly Chinese in origin, crowd into the Cham Shan Temple to mark the New Year, causing traffic tie-ups that stretch up and down Bayview Ave. For those who flock to the temple, it's a special experience to celebrate this important time in a place that holds great meaning for Buddhists.

Started in 1975, the temple is one of Toronto's oldest, and is considered the centre of the city's large Chinese Buddhist population. Throughout the year, thousands of worshippers pass through its red gate and into the temple's sheltered courtyard, like a tiny piece of China with its sacred statues, outdoor shrines scented with the smoke of burning incense, and its huge bell.

On a recent Saturday, streams of worshippers young and old crowded the temple's hushed worship halls, kneeling before the many golden-hued Buddha statues to offer prayers, or rattling boxes of wooden sticks carved with Chinese characters to make special vows. In the basement of the main hall, temple workers carried huge pots of fragrant rice to feed the families gathered in the dining hall, under the gentle eye of a reclining Buddha.

While the temple is a centre of worship year-round, the Chinese New Year is the time when a visit can mean the most.

Chinese culture and Buddhism have become closely intertwined over the centuries, and a visit to the temple to welcome the new year is an important part of the celebration.

"When I first immigrated to Canada, almost 30 years ago, there was only one place that really had a Chinese New Year celebration," says Rickie Chit, originally from Hong Kong. "So now that I've gotten into Buddhism, every New Year, I come here."

Paradoxically, the New Year is not a major religious occasion for Buddhists.

It occurs at the first new moon of spring, a traditional time of worship. And it coincides with the birthday of the Maitreya, or "Future Buddha" (also known as the Laughing Buddha), who is honoured on Chinese New Year's eve. But it's primarily a cultural holiday, and many of the old traditions, such as sweeping the house clean for the new year and holding a family reunion dinner on the eve, have little to do with Buddhism.

However, after the dinner, it is an important tradition for many to visit the temple. At Cham Shan, thousands pour in to chant the age-old prayers amid the smell of incense and the sounds of drums and bells in the temple's main hall, where offerings of flowers and fruit are set before a great statue of Buddha.

Many worshippers make vows and offerings in front of the Buddha, give thanks for a peaceful past year, repent wrongdoings, or make wishes for the year to come. And many crowd around to hear a special sermon on the Heart Sutra, a condensed summary of Buddha's teaching that instructs followers to seek wisdom and unselfishness and to avoid greediness in order to achieve true happiness and enlightenment. The sermon is a temple tradition, carried down for more than 100 years from the first Cham Shan Temple in China.

And while non-Buddhists mark the stroke of New Year by popping champagne corks, for the Buddhists who throng to the Cham Shan, the best way to usher in the new year is to light a stick of incense as the clock strikes 12.

"When you come on New Year's, the main hall is smoky because everyone wants to make an offering," says Bhiksu (Rev.) Shengguang Shi, a monk at the temple.

The temple stays open from early on New Year's eve through New Year's Day, and the crowds continue to arrive. Many come before 6 a.m. for the morning service, and to stand in the chill of the courtyard to hear the great bell ring for the first time in the year — 108 strokes, the same as the number of Buddhist chanting beads.

Worshippers visit throughout the day, to start the year on an auspicious note, and to partake in the temple's monastery-style meal — vegetarian to show compassion, even for those who eat meat the rest of the year.

"Normally, I come before noon on the first day of the New Year," says Carolina Cheung, of Woodbridge, who attends the temple with her husband, Jimmy, and two daughters. "I just want to worship the gods and, hopefully, everything will go smoothly and nicely for the whole year."

Cheung also likes to ring the bell, if the lineup isn't too long.

Hopes of good fortune in the new year and thanks for the blessings of the past year are a major theme of the celebration. But Buddhists believe that to get good fortune, you first have to do good. Thus, giving offerings at the temple will earn you good things in the year ahead.

For the GTA's large, widely spread Chinese community, the temple also plays an important role as a gathering place, where people can meet and stay in touch with their culture.

"Furthermore, meditation, dharma talk, ethics classes, sessions and retreats are held, as demanded by the community, to develop traditional Chinese emphasis on harmony of society and family, respecting the elders and being modest amongst peers.

"There is a lot of pressure in the modern society, especially the Chinese community, which has the added pressure of being a largely immigrant community," the abbot adds. "The temple helps to reduce the pressure and ease the sufferings in our daily life."