VANCOUVER, Canada -- One thing that struck Victor Chan when he spent five years touring the world with the Dalai Lama was how the exiled spiritual leader from Tibet was handicapped by not having a base of operations for his teachings. 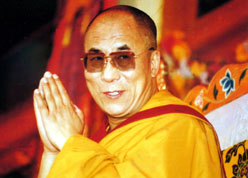 "He doesn't really have a home, a centre, an institution," said Mr. Chan, who has known His Holiness the 14th Dalai Lama for 30 years, and co-wrote with him the book The Wisdom of Forgiveness: Intimate Conversations and Journeys.

That situation is about to change, with the announcement yesterday that the Dalai Lama will visit Vancouver in September to inaugurate the world's first Dalai Lama centre. He will be in the city Sept. 8 to 10.

Mr. Chan, who established a friendship with the Dalai Lama in the five years while he researched the book, said an impressive group of world figures will sit on the advisory board for the centre, which is due to open in 2009.

Desmond Tutu, Jimmy Carter and playwright Vaclav Havel are among those who will serve as advisers.

While the Dalai Lama, who fell in love with Vancouver when he visited in 2004, will continue to live in Dharamsala, India, he will visit the centre regularly, Mr. Chan said.

"He will visit this September and he will be returning yearly or every other year . . . he said to me he is very committed to working with the centre," Mr. Chan said.

The centre, he said, will be an educational facility inspired by the Dalai Lama's teachings in kindness, compassion and interconnectedness.

It will develop programs "directed at creating a more just and harmonious world," and will be open to all regardless of faith, culture or political affiliations.

Mr. Chan said the centre will have not only lecture halls, but also a gallery, library, café and bookstore, where people can meet for discussion.

"We see ourselves as a cultural institution on the same level as the museum, the art gallery, the symphony house . . . Those are all wonderful institutions but they only focus on one aspect of humanity and the centre will different. It will be something that is purpose-built to engage our intellect as well as our need for emotional and spiritual nourishment," Mr. Chan said.

"While you go to an art gallery to look at an object, the centre will be a custom-built space where you go to facilitate an interchange of ideas . . . have specially designed spaces available to encourage people to meet with each other . . . to hang out together and discuss the ideas provided by books and by films."

Mr. Chan said the idea emerged in a series of discussions he had with the Dalai Lama while travelling with him.

"He feels Vancouver is a very good place to have this," said Mr. Chan, who provided a statement from the Dalai Lama endorsing the proposal.

Although he is revered by his followers as the reincarnation of a sequence of spiritual leaders, the Dalai Lama sees himself as "a simple Buddhist monk," who also happens to be the supreme head of Tibetan Buddhism.

The Dalai Lamas ruled in Tibet until China invaded in 1949.