On the founder's birthday followers visit temples, cleanse their minds

Richmond, Canada -- Many Canadian Buddhists will be washing statues of Buddha with fragrant water and flowers this week to celebrate the birth of their religion's founder and cleanse their minds of greed, arrogance and jealousy. 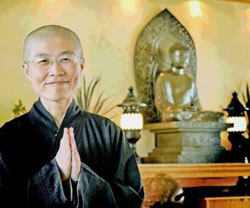 << Abbot Guo Shu Fa Shi stands before a Buddha statue in the main hall of the Dharma Drum Mountain Buddhist Temple in Richmond.

At Richmond's Dharma Drum Mountain Buddhist Temple, the abbot will be among those offering fruit in gratitude to Buddha and urging followers to "detach" from their desires for everything from wealth to other people.

"Ordinary people attach to their bodies and their family members and lots of things in the world, like money and belongings. We will use the ceremony to let go of the vexations that causes," Abbot Guo Shu Fa Shi said Wednesday, speaking in Mandarin through a translator.

Some of Canada's more than 300,000 Buddhists, particularly those from Chinese or Korean backgrounds, will be celebrating Buddha's birthday today or sometime during the week.

Other Buddhists, including those who follow Japanese traditions, mark the birth of Buddha at other times of the year. Scholars do not agree when Buddha, whose name was Siddhartha Gautama, was born in India, although it's believed it was roughly 2,500 years ago.

Buddha's birthday is not as big a festival among Buddhists as Jesus' birthday, at Christmas, is among Christians. Many Buddhists do not have big family gatherings or even attend their founder's celebrations if they're at work or otherwise busy.

"In terms of affecting business in Canada, the only thing most shop owners might notice is that some Buddhists will be buying more flowers and fruit," says Paul Crowe, a specialist in Asian religious history at Simon Fraser University.

Several hundred Buddhists -- most hailing from Taiwan, Hong Kong and China, with some born in Canada -- are expected to show up Saturday morning at Richmond Dharma Drum Mountain Buddhist Temple for the Buddha's birthday, where they will chant and meditate.

The abbot will ritualistically bathe Buddha's statue and encourage adherents to purify their minds of unhealthy attitudes, or "vexations," such as greed, hatred, ignorance, arrogance, doubt and jealousy.

Greater Vancouver had more than 74,000 Buddhists in 2001, most of them immigrants, according to the Canadian census. That's the highest proportion of Buddhists of any metropolitan area in the country.

According to the census, Buddhism's numbers grew by 134 per cent in the decade leading up to 2001. As well, scholars believe some Canadians who tell census-takers they have "no religion" include Buddhist practices in their lives.

Even though today is the day some of the world's Buddhists are expected to mark their founder's birthday, SFU's Crowe said some B.C. Buddhists held their ceremony last weekend, while others will do so this weekend. "Buddhists are pretty flexible about their schedules for these events. They'll do whatever works, whatever is practical. They don't do anything around Buddha's birthday that is equal to all the things Christians do at Christmas," Crowe said.