Lama to speak in Halifax

Nova Scotia, Canada -- Wandering through the market in Marrakech, Morocco, long after the sun has set, Dzongsar Khyentse Rinpoche says taking reality as real will drive you mad. Speaking over a crackling line to his cellphone, the Buddhist lama, filmmaker and author describes our ordinary lives as a “big sleep" — we get scared by what we dream up. 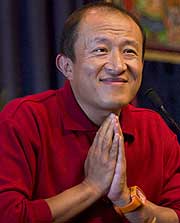 “Reality is not what we think it is," he explains as vendors loudly hawk snakes, carpets, oils and shoe polish. “We have to tran­scend it."

Our problem is that we imagine what we see is real and perma­nent, he says. In fact, it is just a temporary illusion. There’s noth­ing to get stressed about; wait a minute (or a lifetime) and it will pass.

“When you dream you are fall­ing off a cliff, you are scared," Rinpoche says. “But when you realize you are dreaming — and you don’t necessarily wake up — you can stop being scared."

You might even want to take time to explore the experience, he suggests. After all, how often do you get a chance to fall to your death from a cliff and live? Since you’re falling, why not note how the wind blows through your hair and take in your impressions as you fly toward the ground? So it is with life: we are restless dream­ers, twisting and turning in our beds, screaming into the empty darkness, he says. We must wake up and see that what we thought was real and frightening is just a passing misapprehension.

“Meditation is part of that wak­ing up," Rinpoche says.

Rinpoche will be in Halifax this weekend as a guest speaker for the Shambhala Centre. He will be commenting on Chogyam Trung­pa’s Transcending Madness at Dalhousie today and tomorrow and will be interviewed at a pub­lic Shambhala Sun Foundation fundraiser tonight.

Rinpoche, born in 1961 in Bhu­tan, was pronounced the third re­incarnation of the founder of Ti­betan Buddhism’s Khyentse line at seven. He is known as a guru, but says “a guru is someone who eats pizza," emphasizing his own ego-eradicating work is not com­plete. He sees a guru as a sort-of spiritual hit man, a hired gun to murder your ego.

He has a disarming habit of tell­ing the truth. Amid a din of deals being bartered at full throat, the laid-back lama slips into a car for some quiet. Asked about his work as a filmmaker, he relays praise and criticism in the same curious tone. He makes films under the name Khyentse Norbu and is best known for his Buddhist monk soccer movie The Cup (1999) and Travellers and Magicians (2003). He wrote What Makes You Not a Buddhist last year.

The man who says pride is a synonym for ignorance admits he was lured by the ego-stroking pro­cess. “I have not handled it very good," he says. Making movies is an ego-driven venture: he did it because he wanted to tell the sto­ry his way. He also had to sell the idea — and himself — to others. Producers, directors, actors and, ultimately, the audience had to be won. Rinpoche says he’s not sure how he’s going to do this more humbly in the future, but he’ll try.

“I’m teaching here. There’s nothing special in that. That’s what I do," he says, before the con­nection breaks for the final time.