In search of nirvana

Religion on campus: A look into practising Buddhism

Carleton, Canada -- Each morning, Tibetan Buddhist Chris Simpson strives to meditate for half an hour before his daily activities. 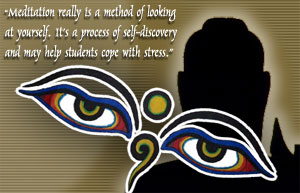 Simpson is not alone in his devotion to Buddhism and shares his love for the faith through his position as president of York University’s Buddhist Student’s Association. Although the number of people interested in Buddhism appears to be growing, York’s association remains one of the few such groups in Canada, making it difficult for students attracted to the religion to learn more about the faith and to practice it.

“I think it's important that our Buddhist students are represented in the York community, and I hope our presence will encourage similar groups in other schools,” Simpson said. “A lot of people are interested in Buddhism, but don't know how to connect with other mediators without visiting a temple, which can be intimidating. So we provide a valuable service.”

“Compared to any of the Abrahamic faiths in Canada, there are far fewer Buddhists,” Simpson explained.

“At York, there are about seven different Christian organizations and at least three different Muslim organizations,” Simpson said. “[Those religions] just proliferate, it seems. There’s just so much more historical basis for exposure for them compared to Buddhism.”

And those who do practice Buddhism are not always easy to pick out of a crowd, sometimes making it difficult for Buddhist students to find each other.

“We’re very invisible,” Simpson said. “I know one girl who, during exams, will set out her little Buddhist statue, so there are occasional signs, but nothing really recognizable . . . It’s not so much about the external customs in Buddhism.”

One of the external customs of Buddhism is meditation, a practice that students may, at times, find difficult to fit into a busy schedule.

“I get up a little earlier in the day in order to do meditation, so in that sense I have to work on a bit of time management,” Simpson said. “Other people might study or mess around a bit more but I obtain benefits from meditation in terms of concentration and focus.”

“Meditation really is a method of looking at yourself,” said Chris Ng of the Buddhist Education Foundation for Canada. “It’s a process of self-discovery . . . and may help students cope with stress.”

“It’s important to have some sort kind of community,” Ng said. “It doesn’t need to be all of students, but as long as people can associate with others and find themselves in a community, they can meet from time to time and make friends.”

“It would facilitate practice more if there were more groups on different campuses but it doesn’t stop people [from practicing Buddhism] . . . people like to read and they can find out things by themselves.”

Ng recognizes that students are often not able to get involved in student Buddhist groups and recommends that students interested in the religion read about it, both in books and from the Internet, and visit Buddhist temples or other Buddhist organizations, which are present in most cities.

“One of the common complaints I find is that people don’t know how to connect or find temples,” Simpson said.

The association, comprised of about 20 formal members, includes individuals wholeheartedly devoted to the religion as well as those interested in the ideology but who would not classify themselves as Buddhist.

“There are definitely different levels of commitment [within the association],” Simpson said.

“There are people who, for instance, come from a Jewish background and they don’t want to give up elements of Jewish culture . . . they want to try to balance aspects of Judaism and Buddhism which, in a traditional context is totally unheard of for both but, in the West, we don’t mind them doing that so much.”

Simpson said he feels the number of those interested in Buddhism has grown over the years.

“[Buddhism] tends to have caught on in popular culture more recently but, in terms of informed practitioners and believers, [there are not large numbers,]” Simpson said. “More people are attracted to it but they’re not necessarily involved in it.”

Ng said Buddhism fascinates many Westerners because of its unique nature.

“In the West, especially, it is very different from the regular faith,” she said. “In many ways you wouldn’t even consider Buddhism a religion . . . it doesn’t share the characteristics of the monotheistic religions.”

“It’s not dogmatic and you’re quite free to figure things out on your own, you don’t have to accept anything at face value,” Ng said. “I think that spiritual freedom attracts a lot of people.”

This was one of the aspects Simpson said attracted him to the religion in his late teens.

“It’s very applied, very practical,” Simpson said. “Whereas a lot of different faiths have their doctrines that they’ll ask you to accept, Buddhism hands you a set of tools and basically says ‘go out there and experience what’s out there to experience.’ ”