Richmond, BC (Canada) -- When in Rome, do as the Romans do and visit the Vatican. In Europe, the churches of Spain and France can be a visual delight. When in Asia, it's the pagodas and temples like Angkor Wat that draw crowds interested in history, archeology and architecture. 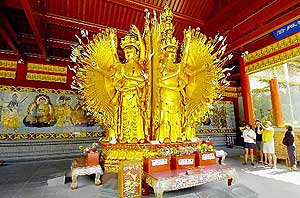 Hindu shrines like Varanasi and Rishikesh in India draw huge crowds of spiritual seekers. But you don't have to travel the world to seek out great architecture in a spiritual setting. Check out the International Buddhist Temple on Steveston Highway in Richmond, B.C. (before you get to the famous fishing piers and restaurants at the touristy wharf) and you'll feel that you've gone on a trip to a faraway land.

The overall design is a unique combination of eastern palatial construction with its porcelain roof tiles and flaring eaves mixed with western technology (concrete columns and steel frames). The traditional Buddhist structures generally follow Northern Imperial style emphasizing the imperial colour yellow. Elaborate renderings of Chinese dragons symbolizing the imperial regime can be found on the roofs, beams and pillars. The roofs are two-tiered with traditional flared eaves, and covered with a sea of golden yellow porcelain tiles.

As visually impressive as all the art and architecture may be, the serene grounds may be even more alluring, adorned with pine and spruce trees, elegant bonsai and intricate flower arrangements. Trees of assorted shapes and sizes are artistically pruned to reflect traditional Chinese gardening. Intricate gazebos, rock landscapes, and elegant lotus ponds enhance the overall sense of serenity.