MONTAGUE, PE (Canada) -- The bunk beds and Chinese herbs are all in place to welcome the student monks set to arrive at the new Great Enlightenment Buddhist Institute here in two weeks. 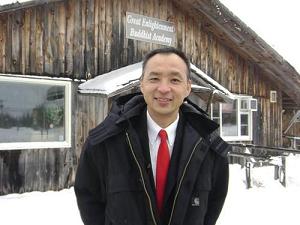 The old Lobster Shanty, once a famous seafood restaurant that entertained Queen Elizabeth in 1973 and Prince Charles and Lady Diana in 1983, is being transformed into a classroom and living quarters for about 100 monks from Taiwan.

“The local community has been very helpful and supportive of the academy,” says executive secretary Peter Wu.

The Buddhists were looking for a place of solitude away from the big city noise and chose Montague after a Maritime search for a retreat location.

“This is everything we were looking for, the monks especially need open space for concentration and meditation,” he said.

The academy was developed to teach student monks about Buddha’s philosophies on how people came to be born, age, disease and die.

“We teach the truth of happiness and the fundamentals to karma,” said Wu. “We are work in progress.’

Overlooking the sparkling Montague River, there is enough room in the rear yard to house four prefabricated homes, providing more housing for the monks.

The monks will go through half-year learning sessions and stay at the academy anywhere from six months to two years.