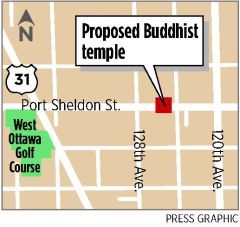 Since selling its Park Township site in 2002 to make way for the Macatawa Legends Golf & Country Club, the 20-family Holland area Buddhist congregation has not been able to find a permanent temple location.

Congregation members have met in meeting halls, homes and -- for a time -- a West Ottawa school the past few years but have struggled to secure a building.

Part of it might be because some neighbors "don't understand our culture," said Liravongsa, a 54-year-old from Laos who makes his home in Hamilton.

"Buddhists in Laos go into the streets and make a lot of noise," he said. "That's how we celebrate."

But after four years of starts and stops to get a temple built in Olive Township, his Buddhist community is again seeking a special-use permit. It wants to build a 2,587-square-foot temple on 20 acres in an agricultural zone.

Ray Atsaphanthong, Wat Lao Prasetavan, Kykeo Silabouth and Liravongsa are asking for the rezoning for a proposed temple at 12528 Port Sheldon St. The request goes before the township's Planning Commission in a public hearing at 7:30 p.m. Tuesday at Township Hall, 6480 136th Ave.

Structures for social and religious activities are permitted in agricultural zones if they have are on at least 5 acres, said township Planning and Zoning Administrator Greg Ransford.

"What we had planned before was too big and cost too much money," Liravongsa said of the $168,000 project. "So, we have changed the plans for a smaller building that is now more affordable."

This is the Buddhist community's fourth try for an Olive Township temple. Members received special-use permits from the Township Board in 2005 and 2006, but those lapsed. The Township Board denied a special-use request in fall 2007 based on site plan changes and because of a congregation citation for using a pole barn on the property as a gathering spot without approval.

"This has been approved several times, but they couldn't get the building built," Ransford said of the Buddhist temple efforts.

The congregation formerly operated the Wat Siriphanyo Aram-Lao Temple in a home on Port Sheldon Road near 124th Avenue. Because of complaints, seven temple members were fined $50 for a township ordinance violation in fall 2006 in Holland District Court.

Temple members aren't bitter about their dealings with the township, saying officials have been very fair to them.

There is the nearby Lao Buddhist Temple of Holland at 5502 112th St. in the township, but Liravongsa said the congregation simply wants its own place of worship.

"I hope it works this time," he said.