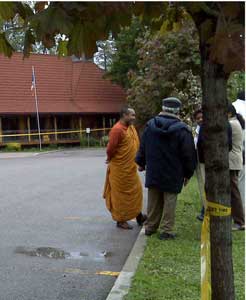 The Maha Vihara Buddhist Meditation Centre, the temple for several thousand Toronto Buddhists of Sri Lankan origin was hit by what fire investigators are calling an arson attack early Saturday morning. Three monks, including one shown in photo, were sleeping in an adjacent building but no one was hurt. (Mike Crawley/CBC)

Three monks, including one shown in photo, were sleeping in an adjacent building but no one was hurt.

The civil war in Sri Lanka is being linked to a fire — that investigators are calling arson — early Saturday in Toronto.

It happened at the Maha Vihara Buddhist Meditation Centre in the city's east end frequented by worshippers of Sinhalese descent, who pointed the finger at local supporters of the Tamil Tigers.

The smell of smoke lingered in the air and yellow police tape surrounded the wooden temple Saturday afternoon. The remnants of the fire included the charred base of a cabinet holding religious artifacts sitting on the grass.

Investigators said someone broke into the temple around 4:30 Saturday morning, spread an accelerant on the floor and the outside walls and lit the fire.

Crews extinguished it before it could spread to an adjacent building where three resident monks were sleeping.

Investigators have not yet determined who is responsible, but Sri Lanka's consul general in Toronto blamed it on local supporters of the Tamil Tigers.

"It's very clear there's nobody else who would cause it ...," said Bandula Jayasekara.

"There's a mafia here, I would say. Tamil Tiger Incorporated. It's a temple. It's a place of religious worship. People come here to pray with children. So if they could burn this, they could do anything. "

The temple, less than 10 years old, welcomes all Buddhists but most of its devotees are people of Sri Lankan origin from the Sinhalese ethnic majority.

Dozens of them stopped at the site Saturday, shaking their heads at what they consider a violation of a sacred place.

"This is not just in Canada," said Chaturi Dissa. "It's not only this temple, the temple in Holland, France and England has been attacked. So it's kind of a pattern.

"These were other countries that had mass protests on the Sri Lankan issue and there's no other reason why the temple should be attacked."

However, one of the youth leaders of recent Tamil protests that have blocked roads in downtown Toronto insisted no one in her community would resort to arson.

"We've been very peaceful in our demonstrations and we would never go that far," said Aranee Muru.

Police are appealing for anyone with information about the fire to come forward.