By Jennifer Green, The Ottawa CitizenJuly 26, 2009

Buddhists Henry Chapin and his wife, Bozica Costigliola, who recently participated in a "street retreat" , sleeping overnight in the shelter of the mill on the island in Ottawa Ontario

Ottawa, Canada -- Philippe Leduc passed his 37th birthday working up the nerve to beg for money in the ByWard Market. “I watched my hand shake, and quiver. I kept doing it anyway.” 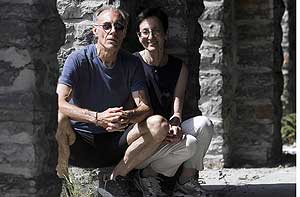 Hundreds of people passed him by without a word. Five gave money — still without speaking to him. Only one, a street kid, stopped to talk.

Leduc’s begging was part of a street retreat, something like a Buddhist boot camp.

For three nights and four days, the group of 15 slept outside on Victoria Island, ate at soup kitchens, meditated, and — most importantly — begged for money. They started to see who they are without a car, house, credit cards, job, or even their usual circle of friends. Similarly, they saw the homeless, not as a pitiable or contemptible mass, but as people in their own right.

The retreats are a modern twist on the ancient Buddhist practice of withdrawing to monasteries during the Indian monsoons. Bernie Glassman, a former aerospace engineer who founded the Zen Peacemakers in Los Angeles, wanted something that would derail expectations and intentions, even good intentions like fundraising or donating to food banks.

In 1991, he started steering his groups to the grimiest part of New York City with nothing but the clothes on their back. Now street retreats are held in cities all over the world. This is Ottawa’s second. Vancouver is to hold one in September.

Many in the recent group were most nervous about having to beg, especially since western cultures bristle at the practice. “I feared it the most and I wanted to do it the most,” said Leduc. “I knew I would be mortified. (Yet) I think it was the highlight for me, panhandling in the Market.”

“I learned it doesn’t matter what people think of me. I really have no clue what they are thinking. Maybe they think, ‘Oh, poor guy, I feel so sorry for him.’ Or maybe they’re thinking, ‘Dirt bag, get a job.’ In both cases, I still feel the same fear. It’s my fear, it belongs to me, and it has got nothing to do with others. That just hit me as I was standing there.”

Another participant, 65-year-old Henry Chapin heard loud and clear from passersby. Most ignored him as he held out his paper coffee cup for donations. “A number of people were abusive: ‘Get a f---ing job.’”

Chapin and his wife, Bozica Costigliola, 56, were the only couple to go on the retreat. “Nobody pretended this was a true homeless experience,” he said from his comfortable home near Westboro.

“I wanted to be amongst people who, in our society, are considered the lowest of the low, but, from a Buddhist point of view, aren’t that way at all.”

For Chapin, a 30-year Buddhist practitioner who has filled his retirement with volunteer work, the days could be grindingly slow. “When you’re on the street, there really isn’t anything to do, except be at certain places at certain times in order to eat.

“I thought, ‘Oh, Jeez, how long is this going to be?’ I think that’s also hard for homeless people. They don’t have a lot to do. It’s a culture of hanging around. You don’t even prepare your own food.”

Finally, he says, he reflected, ‘Well, I’m just here. I don’t have any meetings.’

There is only now.