Tzu Chi: For the common good

Vancouver, Canada -- A penny donated each day is more valuable than a fortune donated just once. It’s a philosophy instilled in the minds of hundreds of local volunteers at the Surrey chapter of the Buddhist Compassion Relief Tzu Chi Foundation – Tzu Chi for short. 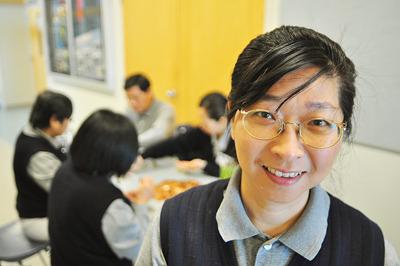 The concept: Love is found through giving help to others, even if it’s just a few cents plunked into a piggy bank every day and donated in bulk later. The more people involved, the better.

On any given day, Tzu Chi members can be found in their trim uniforms with helpful smiles on their faces throughout Surrey – at the food bank, The Front Room homeless drop-in centre and seniors’ residences, never asking a thing from those they give to.

Tzu Chi volunteers have been organizing fundraising campaigns and handing out food and clothing to the needy in Canada since 1992, and in Surrey since 1997.

While Surrey has about 200 active volunteers, there are more than five million worldwide in more than 60 countries.

Anice Kuo first got involved with Tzu Chi in Taiwan 26 years ago, and joined the Canadian foundation when she immigrated in 1990. At first, she just donated money, but later offered her banking experience to help with fundraising.

In 2006, at her retirement, she joined Tzu Chi’s effort to help Surrey Memorial Hospital Foundation’s Emergency Centre Campaign – the goal of which is to add 274,000-sq.-ft. of hospital space with a new emergency room, a children’s ER and other infrastructure.

Kuo and other Tzu Chi volunteers visited more than 35 schools in Surrey and Delta to advance the idea of “bamboo” piggy banks.

Each tin is inscribed with the words: “A little money can do great things.”

To help one’s community, a small amount of money can be donated “every day, not just one day,” says Tzu Chi’s Tom Torng. “We want to teach our children that even if it’s one cent per day, you will keep your love forever.”

“They’re just the most amazing people,” says Surrey Food Bank Executive Director Marilyn Herrmann, who sees them each Wednesday morning donating food and clothing, and sometimes even offering haircuts, to the needy.

“They don’t ask, they just give – no strings attached.”

They also drop off 32 litres of milk each Wednesday at The Front Room.

Torng admits to being nervous the first time he went to The Front Room when their annual Winter Relief Program started there eight years ago.

But his compassion gradually overcame fear, and he now looks at people there as down-on-their luck rather than dangerous.

“We wanted to do something to help them to get out of their poor situation,” he says.

When returning in later years, he instructed volunteers not to say “see you again” – in the hopes that Tzu Chi’s help might improve their lives so they could move on to better things.

If those people’s lives get better, says Torng, they might turn around and help someone else – creating a “circle of love.”