ONTARIO, Canada -- About 2,500 years ago, Siddhartha Gautama, the historical Buddha, was born in southeast Asia, and the Buddhism religion he founded has since become one of the largest religions in the world. 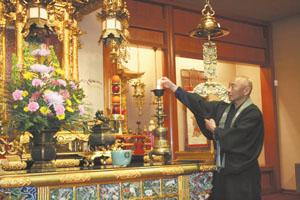 << The Rev. Dennis Fujimoto prepares to light the incense Friday at the Idaho-Oregon Buddhist Temple, 286 S.E. Fourth St., Ontario. A local celebration of the birth of the Buddha will take place at 11 a.m. April 4 at the temple, and as part of the local Lifelong Learners group’s exploration of major religions, Fujimoto will also deliver a presentation about Buddhism, specifically Shin Buddhism, at 1:30 p.m. Thursday at the temple.

Born as the son of a king who shielded him from the suffering in life, the Buddha left the kingdom in search of greater truth, achieved personal enlightenment through meditation and chose to teach his findings to others, according to local Buddhist leader, the Rev. Dennis Fujimoto.

A local celebration of the birth of the Buddha — Hana Matsuri, which means “flower festival” — will take place at 11 a.m. April 4 at the Idaho-Oregon Buddhist Temple, 286 S.E. Fourth St., Ontario.

As part of the local Lifelong Learners group’s exploration of major religions, Fujimoto will also deliver a presentation about Buddhism, specifically the Shin Buddhism branch practiced in Ontario, at 1:30 p.m. Thursday at the temple.

“There’s different branches (of Buddhism), but the basic teachings are the same — different avenues to the truth,” Fujimoto said. “All of the Buddhist practices are to recognize your self-centeredness causes the suffering in your life. So, usually, most forms of Buddhism, you’d think of someone sitting quietly, meditating. That’s the image of Buddhism. Shin Buddhism is different because it’s family oriented. One of the things that makes Shin Buddhism unique is that you can find the truths in everyday life.”
ADVERTISEMENT
*

Founded in Japan by Shinran Shonin, whose 750th memorial was recently held, Shin Buddhism delivered the teachings of the Buddha — which, when translated, simply means “awakened one” or “the enlightened one” — to the farmers and fisherman and common people, whereas previous forms of Buddhism were only practiced by royalty and the wealthy, Fujimoto said. Shonin was the first Buddhist to get married and have a family and his methods were streamlined for everyday people, so despite initial objections to Shin Buddhism, it has grown to become one of the largest schools of Buddhism in Japan and was probably the first school of Buddhism in America, Fujimoto said.

The Idaho-Oregon Buddhist Temple is part of Buddhist Churches of America and is one of only two Shin Buddhism temples in Oregon, the other in Portland, and all Shin Buddhism churches are connected to the “mother temple in Kyoto, Japan,” Fujimoto said.

“Sutras are the words of the Buddha, and they are chanted. This is how they are practiced and memorized at one level,” Fujimoto said and added, on another level, the “oneness” of the congregational chant is an act of moving beyond one’s self-centeredness.

“You’re connecting yourself to everything else (by reciting the nembutsu),” he said. “The subject-object duality evaporates.”

Buddhism is based on natural truths, Fujimoto said.

“Buddhism is kind of like revealing the truths around any person, not just Buddhists,” Fujimoto said. “Buddhism teachings are like natural laws: If you don’t believe in gravity, you don’t just float away.”

Trying to understand the interconnectedness of all life is also one of the focuses of Buddhism, Fujimoto said.

“People want to categorize: ‘Buddhism is this.’ But Buddhism is not something to put in your head. It’s all around us. The conclusion part of it is just an error. There’s all these systems, this grid that extends into the future that is infinitely connected to the past,” Fujimoto said and added the more one recognizes this, the happier they can be. “Through all that, your own life and your appreciation of it become deeper.

“When you can recognize all those connections, then you have the mind of the Buddha,” he said. “We have a long way to go.”