Richmond, Canada -- Struck by the light reflected from the four-metre-high, gold-plated Shakyamuni Buddha, one might think they were resting in an isolated shrine in the hills of Nepal. 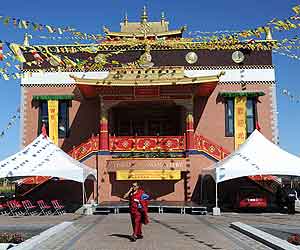 Actually, it's the new Thrangu Monastery in Richmond, the first of its kind outside Asia, according to its builders.

The Thrangu Monastery will be home to seven monks and lamas from Nepal, here to guide local practitioners on the path to peace and enlightenment, said Lyle Weinstein, spokesman for the Thrangu Vajra Vidhya Buddhist Association.

The central Buddha is flanked by 35 smaller Buddhas of confession and 1,000 medicine Buddhas that offer protection from illness and danger, spokeswoman Laurie Cooper said.

Cooper said the statues and artwork in the new shrine were created by lamas, high-level monks who go through rigorous training.

While it takes almost eight years to become a Buddhist monk, to get to the next level, a lama must go into complete isolation for three years, three months and three days, meditating in a tiny box for 24 hours a day, only exiting for meal and washroom breaks, she said.

Weinstein said from July 27 to Aug. 1, there will be a series of teachings by Khenchen Thrangu Rinpoche, called "The Jewel Ornament of Liberation."

Resident monks and lamas will guide practitioners on short-and long-term retreats, and non-Buddhists are welcome to visit the shrine, Weinstein said.