Steven Seagal to give talk on Buddhism on Vancouver Island

Oct. 2 in Coombs; Seating is limited

Coombs, Canada -- Movie star and Sensei Steven Seagal will giving a talk on Buddhism in the western world at the Tibetan Buddhist Temple in Coombs on Oct. 2. 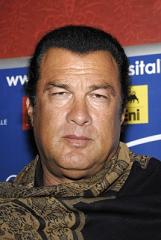 While Seagal is well-known for a string of blockbuster action movies, including Above the Law and Under Siege, he is also revered as a holy man in the Buddhist religion and was recognized as a reincarnation, or 'Tulku', of the Buddhist Teacher Chungdrag Dorje by "His Holiness" Penor Rinpoche in 1997.

Seagal is the first foreigner ever to own and operate an Aikido dojo in Japan. Known as 'Master Take Shigemichi', he was the chief instructor at the Aikido Tenshin Dojo in the city of Osaka.

He later moved to Los Angeles, where he made his film debut in 1988.

Penny McGuire, a volunteer at the Tibetan Buddhist Temple in Coombs, the only Buddhist temple on Vancouver Island, said Seagal, who also goes by the title of Rinpoche or "Precious One" in Tibetan, is currently in Vancouver filming a movie and expressed a desire to visit the temple.

She said he has a "very strong connection" with Lingtrul Rinpoche, the main teacher at the Coombs temple, who also operates a number of temples in Tibet.

"The temple in Coombs, which is also called Kathok Gonpa, is a smaller replica of some of Lingtrul Rinpoche's temples in Tibet that Seagal has visited," McGuire said.

McGuire said Seagal's presentation, called "Life and the Dharma," will begin at 4 p.m. at the temple, located at 2800 Grafton Ave., and is open to the public.

She said the cost is $40 per person but seating is limited so people should register beforehand to ensure they have a place by calling 250-240-3569 or e-mail yoga@shaw.ca.

"Parking is also limited so please carpool if possible, and bring your own folding chair or cushion," McGuire said.