Buddhists to ring in the New Year very quietly

Vancouver, Canada -- The Vancouver Shambhala Meditation Centre will begin its New Year's Eve event with mediation at 8 p.m., followed by Tibetan chants and a ringing in of 2011 with 108 gongs. 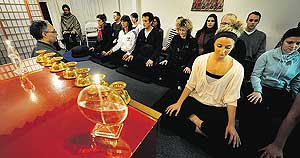 The Vancouver Shambhala Meditation Centre will begin its New Year's Eve event with mediation at 8 p.m., followed by Tibetan chants and a ringing in of 2011 with 108 gongs.
Photograph by: Mark Van Manen, Vancouver Sun, Vancouver Sun

While many people will count down to 2011 with noisemakers and song tonight , a small pocket of Vancouver will ring in the new year in quiet meditation and soft Tibetan chants.

And for the first time this year, the public is invited to join members of the Vancouver Shambhala Meditation Centre to celebrate New Year's Eve through the Buddhist "practice," which is traditionally done during the full moon and new moon of each month.

The community event, which starts at 8 p.m., consists of sitting meditation and Tibetan chanting, and will culminate in a midnight Lhasang and ringing of the gong 108 times to welcome 2011.

"It's an opportunity for people to get involved and experience some of this," said member Paul Bellserene.

The centre, located at Heather and 17th Avenue in Vancouver, doesn't usually celebrate the "solar New Year" but tends to ring in the Tibetan New Year, which will start next year on March 5. The 108 gongs pertain to the beads on the Tibetan mala (a prayer bead garland), while the ringing of the gong is "more of a Zen position," said member Joachim Sehrbrock, who based the event on a practice he saw in Los Angeles.

The event is a first for the members, many of whom grew up here and wanted to recognize the cultural New Year's event while still practising Shambhala meditation.

The centre, which offers an open house with free meditation every Wednesday night, has seen an increasing interest, said Buddhism teacher Susan Chapman, particularly as people seek ways to relax and de-stress in these busy times. The centre has about 100 regular members while up to 60 newcomers attend the open house events, which teach them how to meditate properly.

"It's simple meditation but it's a guide so we can learn how to relate to our own minds without being pushed around by thoughts and emotions," Chapman said. "It's like making quality time for yourself."

The centre is part of an international Shambhala community of meditation centres founded in 1973 by the Tibetan meditation master Chogyam Trungpa Rinpoche, and now led by his son Sakyong Mipham Rinpoche. According to the centre's website, "the vision of Shambhala is based on the wisdom, sanity and compassion that comes from mindfulness-awareness meditation."

The New Year's Eve event, which will begin with meditation at 8 p.m., will wrap up at 12:15 a.m. following the ringing of the gong.