ST. THOMAS, Virgin Islands -- The turquoise waters and swaying palms of St. Thomas could not be much farther from the Indian birthplace of Buddhism, but local practitioners of the eastern religion, as well as others seeking spiritual enlightenment or simply a clear mind, soon will have a space for meditation on the northern shore of St. Thomas. 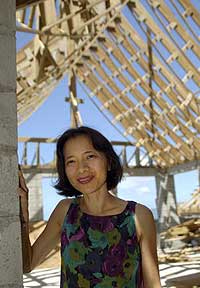 << Daily News Photos by SEAN McCOY
May Trieu, a Chinese Buddhist, is the driving force behind the construction of the first Buddhist temple in the Caribbean: the Nirvana Temple in Estate Mandahl, St. Thomas, right.

May Trieu, a Chinese Buddhist born in Vietnam at the height of the Vietnam War, has spearheaded the construction of what will soon be the first Buddhist temple in the Caribbean: the Nirvana Temple in Estate Mandahl.

The youngest of 10 children, Trieu said the temple is a long-held dream of her family. As president of the Trieu Foundation, she has seen that dream turn to reality in the form of concrete and wood.

"We are building it because we want to promote love, compassion and a spiritual life," Trieu said as she looked out at the sparkling water from the second floor of the temple.

Two years and more than $600,000 into the construction of the three-building compound, soaring ceilings and curved rooftops invite energies and tropical breezes to flow freely through the buildings. Trieu said the design concept of feng shui was used to promote spiritual energy. 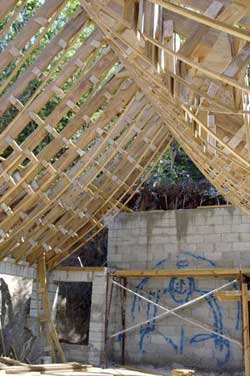 Robert Hoskinson, a carpenter and friend of Trieu, designed the temple and two-building retreat.

"When you design a space, if done well, it supports the lifestyle and thinking of the people who will inhabit it," Hoskinson said.

While there may not be a large Buddhist population in the Virgin Islands, Trieu said, the temple will be a center of engaged Buddhism, where people of all faiths can practice and learn Buddhist philosophy and take it into their everyday life.

The concept of engaged Buddhism was founded by the Zen master Thich Nhat Hanh during the Vietnam War. He was faced with the choice of continuing meditation or helping people who were affected by the war. He chose to do both - to help people while being mindful of Buddhist philosophy.

That philosophy, of self-awareness with a goal to end all suffering, can help the Virgin Islands be a better place, Trieu said.

Trieu said she also hopes to bring people from around the world to the temple and the two retreats being built next door to house visitors.

"My wish is to have a permanent Buddhist monk or nun," Trieu said. "We want to bring spiritual teachers and leaders, meditation masters and leaders from other religions. Even political leaders or others who work for peace, love and caring."

Trieu said the temple is still seeking sponsorship to finish the more than $600,000 of construction remaining. Volunteers for landscaping or other work will also accepted, she said.