Dalai Lama's Wisdom Can Have Meaning for Massage Therapists

There are many individuals who are well known for their spiritual insight and compassion for those who are struggling with life's difficulties. One who is universally listened to and respected is the Dalai Lama. Learn how his wisdom can improve your massage practice - and your life. 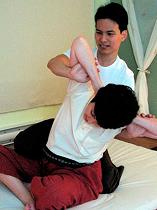 San Francisco, CA (USA) -- Mention the Dalai Lama in a conversation and almost anyone you are speaking with will know to whom you are referring. He is as well known as many rock stars and politicians, though perceived to embody all that is kind and compassionate. Looked up to with respect, he is both a scholar and diplomat, spreading the message of compassion towards all and malice towards none.

Massage therapists know the meaning of compassion, but practicing it and embodying it all day, every day is often hard. We understand compassion as a kind of empathy. As compassionate beings we strive to enter into and perhaps even share some of the suffering of others. Many massage therapists see this sharing as an effective way to understand the physical as well as emotional pain of clients. However, to truly understand the meaning of compassion, one has to go even deeper into the Self and realize it is much more than empathy.

In his book, Ethics for the New Millennium, the Dalai Lama offers his insight to the importance of compassion and how it affects both our daily lives and the lives of everyone around us, whether we interact with them directly - or not.

It is easy for us to have compassion for someone we love or admire - a close friend, a relative, a coworker, even a national figure. It is much harder to have compassion for someone we dislike for whatever reason. It could be his or her politics, lifestyle, opinion. It could even be just getting a "bad feeling" about the person. According to the Dalai Lama, compassion should be "unconditional, undifferentiated and universal in scope" if it is to be seen as an effective force in the world.

For many individuals trying to experience compassion towards others to whom we may be indifferent, or even outright dislike, is difficult and can create a kind of ethical dilemma. However, having compassion for others, no matter who they are, does not mean abandoning our own interests or beliefs. Nor does it necessarily mean loving your enemy. It does mean having an understanding of how another being feels and taking that into consideration when interacting with him or her. In a way, it is perhaps akin to the Golden Rule, interacting with others the way you would hope they would interact with you.

As a massage therapist, you will probably have clients coming to you who you look forward to seeing and those who are less than pleasant to deal with. Of course it is always up to you in deciding to work with someone as a client, or not. The Dalai Lama offers some help in this regard when faced with an ethical dilemma. He suggests asking oneself the following questions:

1) Have I taken into account the overall situation or am I considering only specifics?
2) Am I being short-sighted or clear-eyed?
3) Is my motive genuinely compassionate when considered in relation to the totality of all beings?
4) Is my compassion limited to just my family, friends, and those I identify with closely?

While it is not always possible to take the time to ponder these questions, the more sure a person is of his or her motives and beliefs, the easier it is to make the determination of compassionate action or thoughts towards another being. Acting compassionately can eventually become a habit that runs through both your personal and work aspects of life.

Massage therapists interact on a very intimate level with their clients. They work with them in a very vulnerable state. Clients seek massage therapy to maintain good health, to heal from injury or disease, to receive comfort and to get pampered. By nature, most massage therapists are nurturers and caregivers; being compassionate comes naturally. But everyone needs the occasional reminder when faced with tough decisions.

A Brief Biography of the Dalai Lama
He was born in 1935 with the name of Lhamo Dhondup, but at the age of two was recognized as the reincarnation of the 13th Dalai Lama, Thubten Gyatso and renamed Tenzin Gyatso, 14th Dalai Lama. His destiny was to become both the head of state and the spiritual leader of Tibet. The Dalai Lamas are believed to be manifestations of Avolokiteshvar or Chenzrezig, the Bodhisattva of Compassion and the Patron Saint of Tibet. Since being forced into exile from Tibet in 1959, the Dalai Lama has lived in Dharamsala, northern India, seat of Tibetan political administration.

The Dalai Lama has received more than 84 honorary doctorates, honorary citizenships and other awards in recognition of his message of non-violence, universal responsibility, compassion and understanding. He has also authored more than 72 books. In 1989 he was awarded the Nobel Peace Prize for his non-violent struggle for the liberation of Tibet. He describes himself as being nothing more than a simple Buddhist monk.