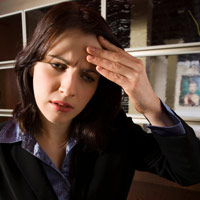 The University of Massachusetts research showed that mindfulness training, based on a Buddhist meditation concept, reduced the distress associated with hot flashes and improved physical, psychosocial and sexual functioning.

"The findings are important because hormone replacement therapy, used to treat menopause symptoms in the past, has been associated with health risks," said study author James Carmody, an associate professor of medicine in the division of preventive and behavioral medicine.

About 40 percent of menopausal women suffer from hot flashes and night sweats, which undermine their quality of life, the researchers noted. But since hormone replacement therapy has been linked with an increased risk of heart disease, breast cancer and stroke, Carmody observed that "not only are women looking for alternative treatments, it is an NIH (National Institutes of Health) priority to find behavioral treatments."

No other treatment has been found to substitute for hormone therapy, according to the study, but mindfulness training appears to allow women to be "less reactive" to menopausal symptoms.

Mindfulness therapy helps focus on the present. Practitioners avoid making judgments and simply accept whatever is passing through their mind while focusing on each breath. The technique is not difficult to learn, but requires some discipline in the beginning, experts noted.

The researchers aimed to influence women's reaction to their symptoms, "including psychological distress, social embarrassment and anxiety."

"We wanted to see if we could affect women's resilience in response to these symptoms," Carmody explained. "We were not trying to affect the symptoms themselves, although there was some effect on those as well."

The study divided 110 women between the ages of 47 and 69 into two groups, one receiving the training, the other "waitlisted" to learn the technique.

Participants filled out questionnaires to determine factors known to influence hot flashes, such as alcohol use, yoga and exercise.

Researchers also measured four dimensions of quality of life: physical, psychosocial, vasomotor (hot flashes), and sexual function. The women rated how much they were bothered by symptoms on a four-point scale ranging from "not at all" to "extremely" bothered. They kept diaries noting the number and intensity of hot flashes and night sweats. On average, the women had five or more moderate to severe hot flashes, or night sweats, a day when the study began.

After taking classes once a week for eight weeks, and a full day of training, the training group women had an average decrease of 15 percent in how much their symptoms bothered them vs. 7 percent for the control group. While hot flash intensity did not differ significantly, the training group reported better sleep, and less anxiety and perceived stress.

At the beginning of the study, which ran from November 2005 to September 2007, participants had "clinically significant" sleep problems. Improved sleep was an important outcome, the study found.

"The thing that surprised us the most was the effect on sleep," said Carmody, noting that mindfulness training was found to be as effective as hormone replacement therapy in reducing insomnia.

Another expert praised the study for using the "mind-body connection" to help women with serious menopause symptoms with "no side effects."

"We've known about the mind-body connection," said Dr. Jill M. Rabin. "We're just beginning to unlock the power of the mind to have an impact on our physiological selves."

The study authors were "self-critical regarding the limitations of the study," said Rabin, chief of the division of ambulatory care and head of urogynecology at the Long Island Jewish Medical Center. Among other things, the study lacked an active control group program, they wrote.

Noting that the women were mostly white and had a high level of education, Rabin said more study was needed to see if the results apply to the general population.

"It's not that the results don't apply, or will be different for a different population," she said. "We just don't know."

The research is published in the June issue of Menopause.